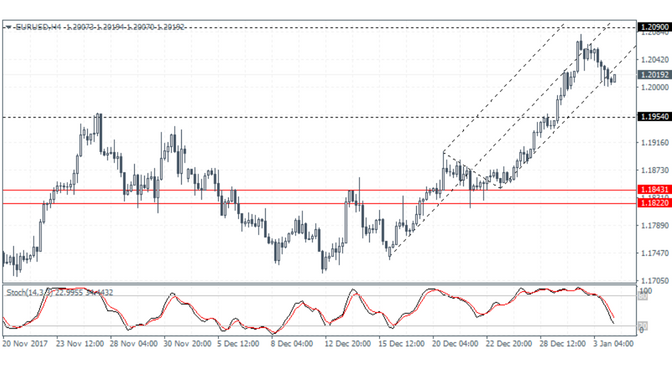 The U.S. dollar turned slightly bullish yesterday as the greenback managed to post a rebound following a long stretch of declines. The gains came as the ISM’s manufacturing PMI surprised everyone with a reading of 59.7. This was higher than the estimates of 58.1 and manufacturing activity advanced from 58.2 in November.

The Fed meeting minutes released later in the day showed that officials factored in the tax cuts. Officials, according to the minutes, were optimistic that the tax cuts were one of the factors that led the central bank to hike interest rates in December. Inflation however, is expected to remain below the Fed’s target for longer.

In the UK, the services PMI data is expected to remain stable with estimates pointing to reading of 56.5 in the index.

EURUSD (1.2019): The EURUSD closed with losses yesterday and price action settled within the range from Tuesday. Price is seen trading just below the 1.2091 level of resistance. On the intraday charts, we see that EURUSD has slipped past the lower median line. We expect to see a retracement as the common currency could be seen paring losses. Another short term rally to the upside, potentially to 1.2091 could eventually complete the rally, as we now expect the currency pair to start posting a correction.