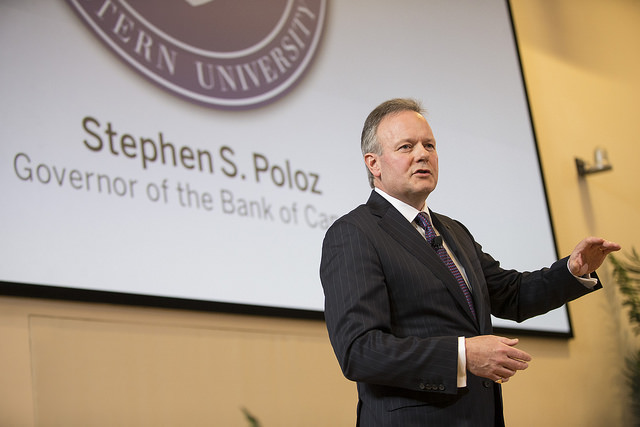 The Bank of Canada will be meeting tomorrow for its monthly monetary policy review. According to the economists polled, the central bank is expected to hold back from hiking interest rates any further. Thus, the BoC’s overnight cash rate is expected to remain steady at 1.0%.

The BoC had previously surprised the markets with a back to back rate hike and also kept the option on the table for further rate hikes. The BoC cited strong economic growth as a reason which put it on the top among its peers. The mounting household debt was also another factor that played a role in the BoC’s tightening cycle.

Still, the markets are quite divided on the near-term rate hike cycle from the BoC.

According to a survey by Reuters, primary dealers said that the BoC was most likely done with hiking interest rates this year. Despite a majority expecting no rate hikes this month, over the period until December, the risks for another rate hike remain strong. This is subject to further upbeat developments in the Canadian economy.

In a separate poll conducted by Bloomberg, the report showed that some economists expect the BoC to raise the benchmark interest rates on Wednesday, putting the overnight rate to 1.25% from the current 1.0%

However, the central bank is expected to move for an aggressive rate hike plan next year. By some estimates, the BoC’s rate hike is projected to be 1.75% by the end of 2018.

For the BoC, the Federal Reserve’s rate hikes will also be an influence on policy decision making. Without the Fed hiking rates, the current interest rate path from the BoC could put the Canadian dollar at risk as it appreciates strongly against the US dollar. The US is one of the key export markets for Canada.

Thus, the likelihood that the BoC could remain in a wait-and-watch mode for the Fed to act in December is most likely to be the play. Of course, the economic indicators will also play a key role. If further improvements continue, the BoC could very well move ahead with one more rate hike this year.

Most imports from Canada and a large share from Mexico don’t enter US through NAFTA b/c tariffs are low and rules of origin are complex. pic.twitter.com/EaLjfuFv0U

The BoC is also likely to consider the developments in regards to NAFTA and could thus remain patient until more clarity emerges. This view is validated by the fact that the BoC Governor Poloz recently said that after two consecutive rate hikes, the central bank could shift to a more patient tone.

Poloz also briefly mentioned about NAFTA and the uncertainty due to the fact that if the trade deal was void, Canada is one of the countries that could lose a lot in terms of exports to the US. Even the timeline for the NAFTA negotiations remain clouded which when taken into consideration builds more evidence that the BoC will stay on the sidelines today.

From a fundamental perspective, the Canadian economy has remained on a firm footing. Although GDP is expected to slow in the third quarter, this was attributed to the weaker exports. While this may be the case, the recent business outlook survey report released by the BoC showed that exports were once again rising. This suggests that the momentum is likely to pickup in the coming months.

While the central bank has a high likelihood to remain on the sidelines at tomorrow’s meeting, the prospects for a December rate hike still runs high. The BoC is scheduled to meet on December 6th where there is a strong chance of another rate hike.