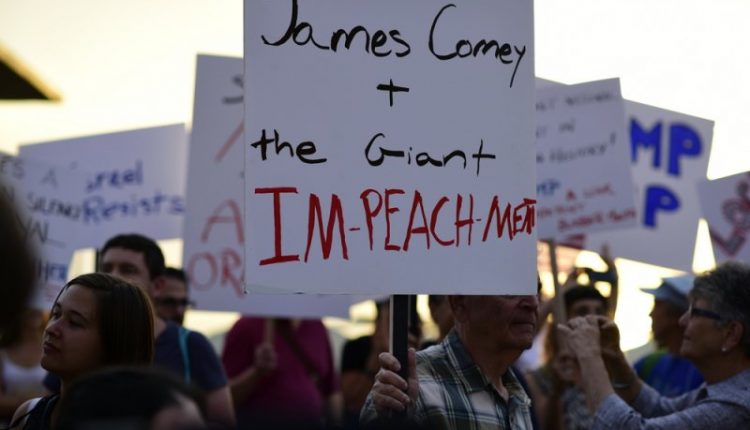 Former FBI director James B. Comey on Thursday used a dramatic appearance before the national audience to sharply criticize the character of the president, accusing Trump of firing him over the Russia investigation and then misleading the public about the reason for the dismissal.

Comey made is clear by saying that Trump and his team told “lies, plain and simple” about him and the FBI. Comey said that he wrote a memo after one particular odd private meeting with the president as he feared that Trump might lie about it.

According to reports, this is the first time the FBI director ever wrote a memo about meeting with the president.

According to Comey’s judgment, he said “I was fired, in some way, to change – or the endeavor was to change the way the Russia investigation was being conducted”

The testimony continues to raise more questions and red flags about the credibility of the US administration.

However, the White House deputy press secretary Sarah Sanders said “I can definitely say the president is not a liar,” she added “ I think its frankly insulting that the question would be asked.”

The investigation is not over yet, and the private investigation will continue and the next few days/weeks will reveal more info. However, the market reacted positively to the testimony, as it wasn’t as bad as traders thought.

The US Equities spiked to new record, while the US Dollar recovered some of last week’s declines, while safe haven assets took a hit.

The US Dollar is now higher for the third day in a row, something that we haven’t seen since the middle of May, trading above 97.0 until this report was released.

Yet, the big question will be answered by the Federal Reserve later next week. A rate hike is highly possible, but it doesn’t grant a change in the trend as well, especially after the recent slowing down in most economic activities.

What matters in next week’s decision is the Fed’s economic projections and whether the Fed is still looking for further rate hikes. However, from what the economic activities show, the Fed is most probably would be dovish, and that would likely keep the US Dollar under pressure for the rest of Q2.

For the time being, from a technical point of view, selling USD rally remains the favorable strategy. Any upside rally is likely to remain limited below the short-term downtrend which stands around 98.50, which is also confluence with a former support area, which switched to a resistance.

Even though it becomes a boring headline, the US equities keep pushing higher and stay at new historical highs.

Yet, I’am still not interested in jumping into such an overvalued market anytime soon, since we haven’t seen any reasonable retracement for years now.

At the same time, there are still some opportunities in stocks, and today traders might need to look at SNAP stock, which likely to move sharply lower today.

Citi Bank decided to downgrade SNAP stock from Buy to neutral with a price target of $20 down from $24. The downgrade comes on the back of user growth concerns, seeing 25% decline in user growth in Q2 compared to the previous forecast.

Such news would put a notable pressure on the stock today. It is already down by 1.8% in Pre-Market now, trading around $18.50.

Downgrades like this usually leas to 0.5 to $1 move lower if not more. Therefore, $18 or $17.50 might be considered as the next possible targets. I don’t use snapchat application, but I would love to trade it.

Disclaimer: All information provided is an opinion and is for informational purposes only.  It is not intended to be an investment advice.