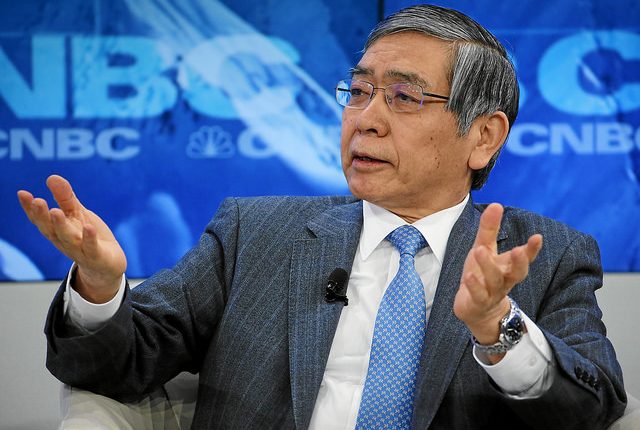 The Bank of Japan Governor, Kuroda said that the central bank has ample room for additional easing and that it would take appropriate steps “without hesitation” in order to achieve the bank’s 2% inflation target.

Kuroda’s speech at the Jackson Hole symposium was released on Sunday, where he said, “QQE (Quantitative and Qualitative Monetary Easing) with a negative interest rate is an extremely powerful policy scheme, and there is no doubt that ample space for additional easing in each of these three dimensions (quantity, quality, and the interest rate) is available to the BOJ”

Kuroda also stressed on carefully examining risks to the economic activity and prices at each of its policy meetings. He, however, did not elaborate how or when the BoJ would consider further stimulus. The Bank of Japan’s next monetary policy meeting is scheduled for September 20, where it is also expected to conclude a comprehensive analysis of its policies so far.

The Japanese yen which fell sharply on a bullish US dollar was seen maintaining the momentum as prices trade near 102yen, a key resistance level. A breakout above 102 could see the dollar extend gains to as high as 104yen.

The governor of Cleveland Federal Reserve, Loretta Mester said that there was a compelling case for the Fed to raise interest rates in the near future. Her comments came as part of an interview with the Financial Times, published on Sunday.

“I think that basically, we are at the point where we have met that goal, and I think we are very close to meeting the inflation goal in terms of the path being up to 2% over the next couple of years,” Mester told FT.

Mester is a voting member of the FOMC meeting. She, however, declined to comment on how she would vote at the upcoming FOMC meeting in September. She said that she would review the latest data and hear the views of her colleagues. Previously, Ms. Mester was speaking at the Jackson Hole symposium where she said that there was a compelling case for making another gradual step. Reiterating the views from the Fed Chair Yellen, Mester said that the Fed was “about there” in terms of maximizing employment, one of the dual mandates of the Fed.

Mester joins other hawkish Fed members, besides the Fed chair Yellen who have come out strongly hawkish over the past week. Despite the developments, the markets are still not very convinced that the Fed will hike rates in September, although that could change over the coming weeks as the August payrolls report looms this Friday.

Sweden retail sales fall for a second month in July

Retail sales in Sweden posted a second monthly decline in July as sales fell to a seasonally adjusted 0.90% on the month, data from Statistics Sweden showed on Monday. This follows a 0.70% decline seen in retail sales in June. On a year over year basis, retail sales increased 1.10% but were still slower compared to the 3.90% gains from June.

The pace of increase in retail sales slowed for the second month in June after sales rose 5.70% in May this year. Andreas Svensson, HUI Research said, “The Swedish retail sector paid the price of its successful July figures last year by having a low level of growth this year. July 2015 was the strongest month of the year, with an increase in sales of 9.3 percent. So far this year (January-July) total retail sales have increased 3.8 percent in current prices.”

In a separate release, Sweden’s trade balance data came out at SEK 0.5 billion in July falling short of 0.4 billion that was forecast. Imports and exports dropped 4.0% on a year over year basis. Trade with countries outside the EU saw a trade surplus of SEK9.5 billion while trade with EU posted a trade deficit of SEK9.0 billion.

On a seasonally adjusted basis, the net trade deficit of the country stood at SEK0.8 billion in July, rising slightly higher compared to the same period a year ago.

Consumer spending in the US increased for the fourth straight month in July indicating that domestic consumption has been driving growth into the second half of the year. Data from the US commerce department showed that personal consumption rose 0.30% in July on a seasonally adjusted basis from the month before. Personal income increased 0.40% picking up from the prior two months. Economists forecasted that personal spending would rise 0.30% in July while personal income was projected to rise 0.40%.

Consumer spending saw some slowdown, falling from 0.50% in June and has been moderating after rising 1.10% in May. Consumer savings increased in July with the personal savings rising 5.70% from 5.50% upward revised number for June.

Today’s report also included the personal consumption expenditure, which is used by the Fed to gauge inflation. The data showed scant signs of inflation with the core PCE seen rising 1.60% on the headline on a yearly basis. Forecasts were for a 1.50% increase. The headline PCE price index matched estimates rising 0.80% in July, slightly lower than the 0.90% increase in June.

The US dollar strength continued to remain the main theme of today’s trading session which was void of any major market moving events for the most part. EURUSD, trading at $1.1170 is down 0.20% adding to the 0.77% declines posted on Friday.

Gold and Yen – The correlation that is worth knowing!