Week ahead in FX: GDP revisions and Fed speak 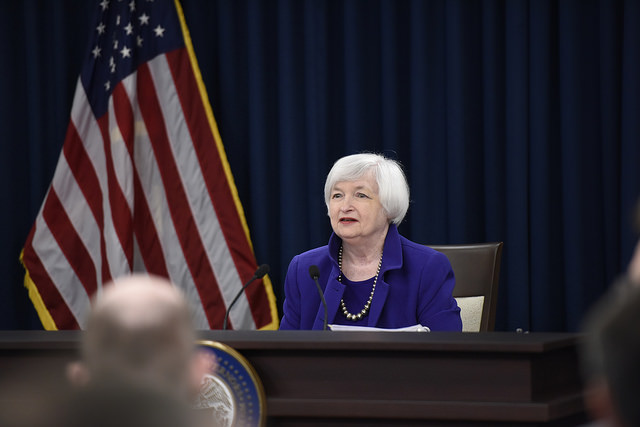 The British pound was the strongest currency last week, rising broadly and closing 1.01% higher against the dollar. The gains in the Sterling came with opinion polls showing the stay camp taking a lead over the ‘leave’ camp in the Brexit polls. Economic data was also supportive with retail sales rising more than expected while weaker fundamentals such as inflation and a flat labor market performance were broadly ignored.

The yen and the Swiss franc were the weakest currencies last week as improved market sentiment saw the safe haven currencies give back the gains. Both the yen and the franc lost 1.36% and 1.47% respectively.

AUD: The week ahead is relatively quiet for the Australian dollar which has been trending lower on weaker sentiment and still reeling after the RBA rate cut. Last week’s moderate labor market data also did not help the Aussie much. The week ahead will see the RBA governor Stevens speaking on Tuesday, and the next main data is on Thursday with the private new expenditure expected to show a 3.50% declines in the first quarter of this year, coming off a 0.80% increase in the previous quarter.

JPY: A quiet week for Japan kicks off on Monday with BoJ deputy governor Nakaso speaking. On Thursday, the national CPI data will be released. The headline CPI is expected to show a 0.40% decline on a year over year basis in April, accelerating the 0.10% declines from March. Excluding fresh food, Japan’s CPI is expected to fall 0.40% in April, down from 0.30% declines in March.

EUR: From the Eurozone, flash PMI numbers will be released in the early part of the week. On the whole Eurozone manufacturing, PMI is expected to rise moderately to 51.9 from 51.7 in April while services PMI is expected to inch higher to 53.3 from 53.1 previously. Tuesday will see German GDP data coming out which is expected to show a confirmed print of 0.70% GDP growth in the first quarter and a 1.30% annualized GDP growth rate for the quarter. IFO and ZEW business and economic sentiment releases make up for the remainder of the week.

GBP: A quiet week for the sterling will be dominated by Thursday’s revised GDP numbers. Expectations are flat, calling for an unchanged GDP growth rate of 0.40% in the first quarter of 2016 while the annualized GDP growth rate is expected to remain unchanged at 2.10%. With the lack of fundamentals, the dollar and Brexit news will likely move the markets over the week.

CAD: The economic calendar is quiet for Canada with the exception of the Bank of Canada’s monetary policy meeting on Wednesday. The interest rate is expected to remain unchanged at 0.50%, and there will be no press conference following the event.

USD: Against a quiet week for most of the currencies, the US economic calendar is packed. Watch for FOMC voting member Bullard’s speech on Monday which will also see the flash manufacturing PMI data coming out followed by flash PMI services on Wednesday. On Thursday, the markets will be focusing on the durable goods orders which are expected to rise at a slower pace in April compared to March. Fed’s Bullard and Powell, another FOMC voting member will be speaking later during the day. Friday will be busy for the US dollar which will see the second revision to the first quarter GDP. Expectations call for an increase to 0.80% compared to the initial estimates of 0.50%. Few hours later, Federal Reserve Chairwoman, Janet Yellen will be speaking.