Forex Price action: Why you should always use candlesticks in context of support and resistance 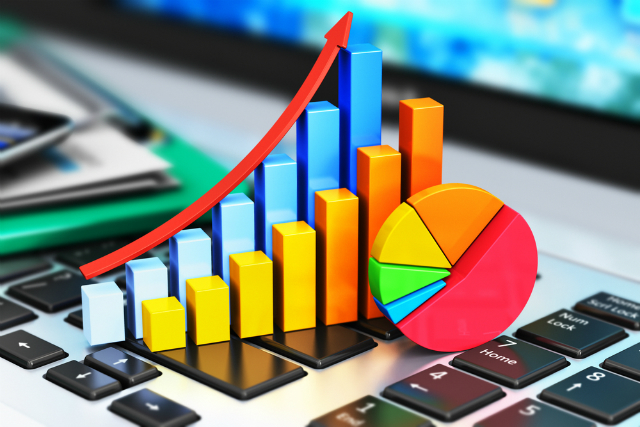 However, as with anything that has to do with technical analysis, trading merely based off one component of your analysis can prove to be detrimental. This fact is attested by the knowledge that there are many dedicated websites that focus purely on backtesting the efficiency of candlestick patterns. As one can expect, the results are not always right.

The first chart below shows some examples of failed candlestick patterns in the context of trading with price action. Of course, one only needs to look around for more such patterns to see that not everything is the way it seems. 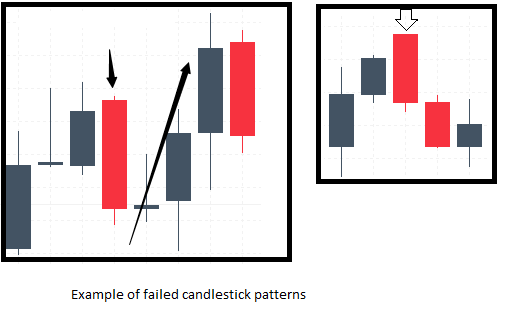 So, does this mean that traders shouldn’t rely much on Candlestick patterns when it comes to trading with forex price action? Quite the contrary!

Call it supply/demand or support/resistance, the fact that prices tend to move in a random or zigzag fashion, bouncing off key price levels. When there is a strong bounce off a price zone, it is termed as a support or a level of supply and when prices see a sharp selloff, that level is deemed to be a resistance level or a demand zone.

Candlestick patterns, although not always reliable in isolation tends to improve the performance when viewed in the context of support/resistance levels. For traders who do not trade with forex price action, even indicator based trading systems can be vastly improved when trades are entered based off strong candlestick patterns instead of relying on the indicators to determine the trade entry and exits. 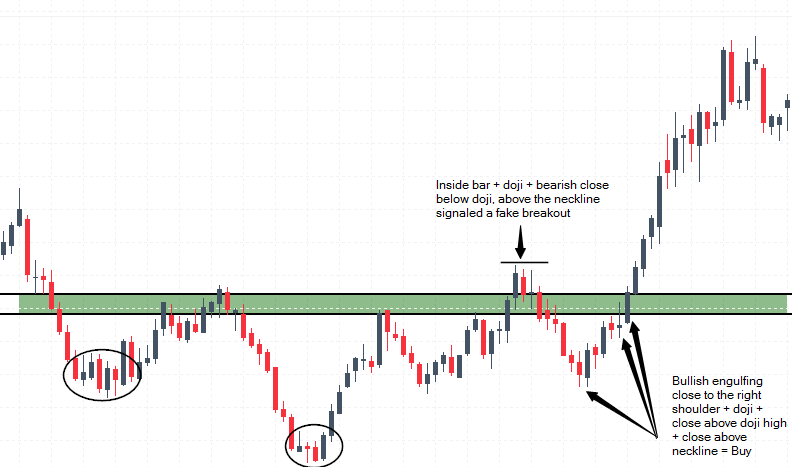 The chart above illustrates how the Candlestick patterns can prove to be a great way to trade when viewed within the context of the larger picture. The larger picture here, being the inverse head and shoulders pattern that was formed. After the right shoulder was formed, price broke out from the neckline zone. For the untrained eye, that would mark as a key level to go long. However, notice how the fake out above the neckline would have trapped many a long position traders who would have given up on a rather potentially lucrative trade.

After prices fell back below the neckline, we notice the bullish engulfing that was formed, near the same price level as the original right shoulder. This bullish engulfing candlestick was later followed up by a doji and a bullish close above the doji high, closing above the neckline. These simple candlesticks alone, taken in context with the inverse head and shoulders alongside the support/resistance levels would have offered the most patient trader a great opportunity to go long from with little to no risk as price broke out strongly to the upside.

As illustrated by the simple example above, traders who want to make use of forex price action will need to be patient and also be able to understand the full picture. While the chart patterns might be laying the larger groundwork, the candlestick patterns, when viewed in the context of the bigger picture can offer traders a great way to trade, which also helps in greatly increasing the reliability when using candlestick patterns for trading forex price action.