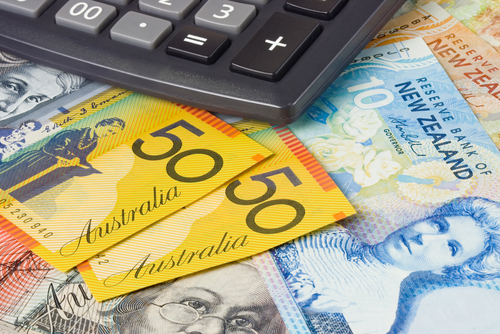 The Kiwi Dollar find saw some relief after weeks of selling off sparked by comments from RBNZ Assistant Governor warning of rate cuts and followed up by the RBNZ’s monetary policy decision a week later. Despite a weaker Greenback, the Kiwi dollar fell under pressure after topping out near 0.772 levels to decline to lows of 0.7312. Retail sales data released earlier today showed a pickup of 2.7% for the quarter beating estimates of 1.6% and up from 1.9% (revised) from the previous quarter. On the core retail sales front, data was positive as well rising 2.9%, well above the 1.5% estimates.

In the process, from a technical perspective, the NZDUSD seems to have played out well in regards to the technical chart patterns.

The Double top pattern formed near 0.772 saw a prompt decline to 0.7439 after a break of the double top neckline at 0.754. It later followed by a bearish flag pattern that formed after the trend line break, which saw the currency drop to the lows.

Having completed the technical patterns, the NZDUSD now looks poised for what could be a falling wedge, which gives a rather large upside target. The risk to this view however, is to see a reversal near the current level at 0.752 and the main support at 0.7439 which is waiting to be tested.

This could offer some early clues into the price action as a retest to 0.7439 but not lower than 0.735 could be indicative that price action would be waiting to break out higher with the initial target coming in at 0.754 (the double top’s neckline support/resistance).

With the Greenback continuing to remain under pressure, the recent good data on retail sales (after a disappointing unemployment data previously) should help support the Kiwi in the near term.

The AUDNZD is another currency pair which saw a strong rally fueled by the interim weakness in the Kiwi and the strong and positive reaction from the Australian dollar despite the interest rate cuts from the RBA. The AUDNZD reversed near parity and staged a quick rally towards 1.07 levels. However, major resistance comes in at 1.128 – 1.12 levels and at the time of writing, we are noticing what could be a short term correction to the rally as the support comes in at 1.05 price zone. A retest of this broken resistance for support could see the AUDNZD eye for higher ground, while alternatively if 1.05 gives way AUDNZD could again see its way lower.

On May 19th, the RBA will be releasing its monetary policy meeting minutes which will give insights into the board’s thinking that led to the interest rate cut in its April monetary policy meeting. A dovish outlook from the RBA could see some short term move to the downside as far as the AUDNZD currency pair is concerned.