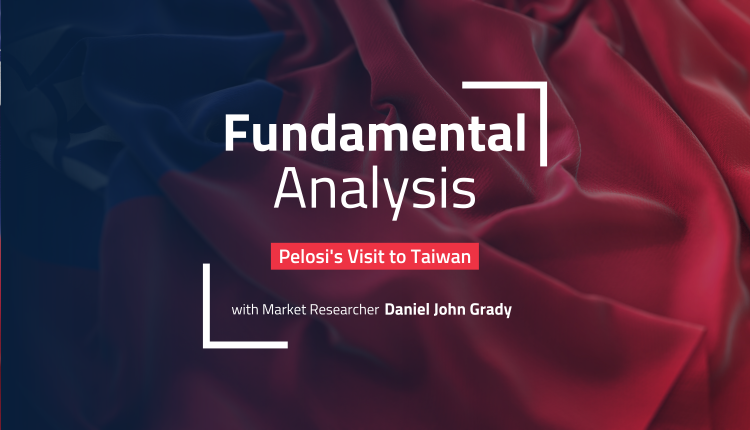 So far this week, safe-haven flows have been the theme of the markets. The yen strengthened substantially, and the Nikkei fell. US stocks were down on the first day of trading. Of course there are other factors affecting market sentiment, but it’s evident that geopolitics is playing its hand as well. Currencies could be extra volatile over the next few days.

The first part is the move away from the risk appetite that we are already seeing. After the event is resolved, then there could be a reversal in those flows, and a rebound in the markets. So keeping track of what’s going on can give some good insight into what will happen in reverse through the latter part of the week.

US House of Representatives Speaker Nancy Pelosi is expected to arrive in Taiwan later today, and meet the country’s President early tomorrow. Both of those are in Taiwanese time, so that would be through the night for European and US traders. Pelosi would be the highest ranking US official to visit the disputed island in 25 years, making it a symbolically important event.

Note how that was all written in conditional tens? There is no official confirmation that the visit will happen. Pelosi herself tweeted her itinerary earlier in the week, and didn’t include Taiwan. China is very unhappy with the visit, and has threatened to retaliate. Ominously, among the potential retaliatory measures are “military” options. The editor of the Global Times, which is understood to represent the Chinese government, tweeted earlier today underscored that military retaliation was possible.

But, what does that mean?

Despite press consternation, actual actions that are seen as real possibilities are generally seen as more symbolic – like the visit. China is already conducting life-fire exercises in the South China Sea. Reportedly they could fire life ammunition in the Taiwan Strait, which hasn’t happened since 1995.

Concrete measures that could impact the markets are expected to be more discreet. Yesterday, China banned food imports from over 100 Taiwanese companies in a measure that’s seen as retaliation for hosting the US House Speaker.

So, why all the consternation?

Taiwan Semi’s shares dropped substantially ahead of the visit, as Taiwan’s semiconductor industry is seen as the key issue. Chips have been in short supply, despite almost two years of trying to ramp up production around the world. Any possible interruption to semiconductor supply is likely to get investors worried.

But the bottom line is that markets don’t like uncertainty, and either outcome of the visit could have important implications. If Pelosi goes through with the visit, which is the most likely scenario, retaliatory measures from China will have to be taken into account. If Pelosi doesn’t go (and there is still no official confirmation), it could be seen as the US backing down in the face of Chinese pressure, and that could change the geopolitical situation.

Taiwan is the last stop on Pelosi’s South East Asia trip, and she’s expected back in Washington by Thursday. Then we’ll know how the whole thing will turn out. In the meantime, risk aversion might be the major theme of the markets, particularly those exposed to Asia.