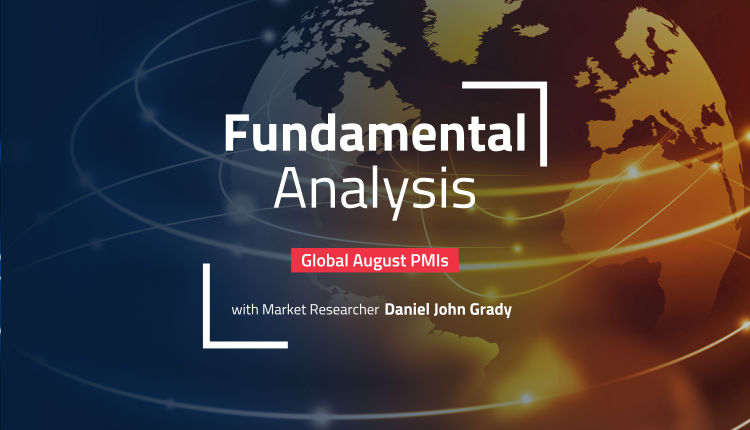 Thursday is expected to be one of the most active days of the week, with a host of economic data expected through the day. What could be the broadest reach in the forex market is the latest PMI figures from around the globe. With the world teetering between inflation and recession, how much purchasing managers are paying, and if they are increasing or decreasing buying, is an important factor.

August is typically a growth month, particularly this time with generalized optimism right up until Jackson Hole. Therefore, if PMI figures come in below expectations, they could have a bigger impact on the market. Overperformance in the figures might help recover some of the optimism in the markets after traders expect another round of tightening from central banks through September.

What to look out for:

The Asian Giant kicks off the PMI parade, reporting on Wednesday, as usual one day ahead of the rest. Official NBS Manufacturing PMI is expected to show marginal improvement, but stay in contraction at 49.2 compared to 49.0 prior. China’s drought conditions and tight energy supply issues have been constraining economic activity. That can be seen in the expectations for NBS Non-Manufacturing PMI which is forecast to fall to 52.0 from 53.8 prior.

The private Caixin Manufacturing PMI is expected early Thursday, which is expected to stay barely in positive territory with a slight move lower to 50.2 from 50.4 in July.

The commodity giant is expected to join the downward trend, but still stay comfortably in expansion at 54.5 compared to 55.7 prior. Follows a 9% drop in iron ore shipments from Port Hedland.

The first of the large EuroZone countries to report Manufacturing PMIs, expected to show 48.5 compared to 48.7 prior. The slight decline while staying in contraction is the consensus for most of the EU countries, so if there is a deviation here, it could set up expectations for the rest of the data.

After extensive droughts in the north and surging gas prices, a slight decline in PMI isn’t all that much of a surprise. Expectations are for Manufacturing PMI to slip to 48.0 from 48.5 in July.

The largest economy in Europe is expected to report a marginal improvement in line with the preliminary numbers from two weeks ago. German authorities reported that they were ahead of schedule in stocking up natural gas for winter. Manufacturing PMI is expected to improve to just barely in contraction at 49.8 up from 48.5 prior.

Manufacturing PMIs in the UK are expected to drop into contraction at 46.0, significantly lower from 52.1 prior. This is in line with the preliminary figures, and attributed to adjustments to energy prices.

ISM Manufacturing PMI in the US is expected to stay comfortably in expansion at 52.0, but lower than 52.8 prior. However, this was before Powell’s announcement to continue tightening.

Oil Looks for $100 as Gold Struggles!