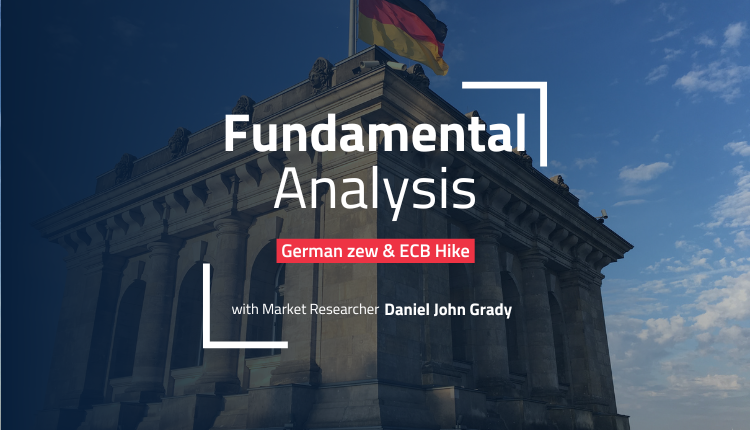 With the Euro fast approaching parity with the dollar, there is a lot of attention on what the ECB will do at their next meeting. But, as the central bank that has waited the longest to deal with the post-pandemic inflation bout, the ECB is in a delicate position. Europe is not immune from the economic slowdown, with worries about recession being caused by aggressive monetary policy.

If we get more data showing that the common economy is in trouble, it’s possible the ECB could continue to hesitate. With the Fed broadly expected to raise rates at the end of the month by another 75bps, this increasing gap between the interest rates could push the common currency further lower. But, if there are some improving data points, it could firm up expectations of the ECB finally taking action.

The German ZEW Economic Sentiment Survey is one of the leading indicators for the economic outlook for Europe. What traders typically are most focused on is the projection of where businesses think things will be in the next six months. The July release tends to be a little more important than the others, because it includes projections past the important holiday season and into next year.

Germany’s July ZEW Economic Sentiment Index is expected to fall to -38 from -28 in the prior reading. The indicator has been slowly rising over the last couple of months, though still well into the negatives it has been maintaining since the start of the war in Ukraine. After quite a bit of talk during the survey period that Russia might cut off gas supplies to Europe, it’s not exactly a surprise that the indicator is projected to return to its worst level in three months.

One of the main issues that the ECB is dealing with is the so-called “fragmentation” problem. That’s the issue with northern bond yields falling while periphery yields have been rising. The worry is that tighter monetary policy will exaggerate this difference, leading to unequal financial situations across the common market.

If Germany’s economy is at risk, then this could increase demand for fixed income and exaggerate the fragmentation problem. Part of that concern revolves around measures taken by the German government to pass on increased energy costs to consumers, which would be expected to exaggerate the inflation issue. On the one hand, that could provide an incentive for the ECB to raise rates; and on the other, to keep rates on hold to help support the economy.

This division in views could lead to a stronger market reaction to the ECB. Most recently, Austria’s MPC member Holzmann called for as much as 125bps of hikes over the next two meetings: 30 points in July and 75 points in September. Remember that the ECB doesn’t hold a meeting in August.

In contrast, Greece’s MPC member focused on the fragmentation mechanism, calling for strong measures to support the periphery, while not mentioning interest rates. Should this division maintain in commentary, it could lead to the Europe continuing to drift down until the ECB meeting.