US May NFP: Problems with Normalization 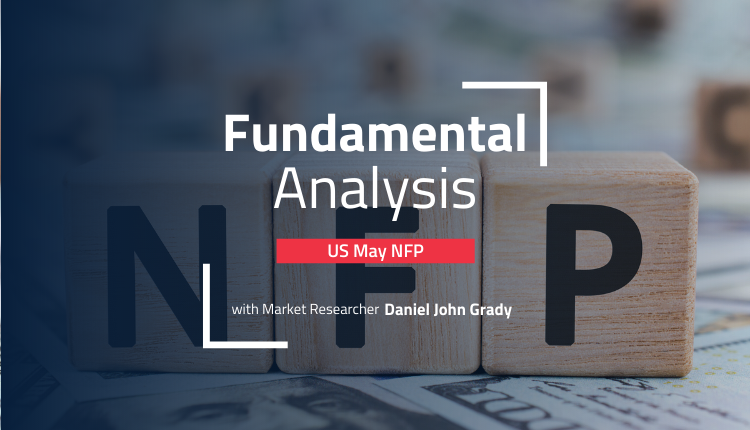 Despite having relatively low unemployment, there is a significant problem within the US labor market. The issue isn’t directly the number of jobs created, as that has been well above the pre-pandemic average. Which means that once again the focus of the markets might not be on the headline result, but the constituent data.

The Fed has moved on

Usually, the focus of NFP is related to the Fed’s dual mandate to keep unemployment low. But the unemployment rate dropped below structural levels months ago and has kept moving lower. The Fed is now primarily worried about inflation, which is why the number of jobs created might not have as much of an impact on the currency market.

It could however impact the forecasts for US growth. In order for the economy to keep growing, it needs to produce. Which means people need to be working. The latest BLS survey showed an all-time record high of 11.5 million jobs vacant, with just a little over 6 million people looking for work. The hardest hit sector being retail, where firms simply can’t find enough workers. This is despite wages growing at well above 5%.

That’s where the problem lies

While wages are rising in nominal terms, they aren’t keeping up with inflation. Which means that more and more Americans are switching jobs in an effort to make more money. BLS reported a record 4.5 million employees switched jobs in their last monthly measure. Meanwhile, labor force participation remains stubbornly at near-record lows.

The Fed is worried about a wage-price spiral that could lead to massive inflation. But far from that, it appears that people simply aren’t taking jobs. The relatively small number of people seeking work compared to the high labor churn rate suggests that more jobs are becoming vacant than people are joining the workforce. So far, that hasn’t translated into substantial wage increases. But the current conditions imply increasing destruction of consumer purchasing power, and eventual economic problems.

US May NFP is expected to come in at 325K, down from 428K in the prior month. This is back to the top of the range from a “normal”, non-recovery month. But what could get investors’ attention more is the average hourly earnings figure, which is forecast to increase 5.2% over last year. This is slower than the 5.5% reported in April.

The positive side of that is it could be a sign that Fed policy is working, and inflation might be starting to abate. The negative side could be understood that American workers are losing an increasing amount of purchasing power as there is a 300bps gap between wage increases and inflation.

The unemployment rate is expected to tick down to 3.5% from 3.6%, despite a forecast of a minimal increase in the labor force participation rate to 62.3% from 62.2%.

Euro Looking for Another 1.05 Test?