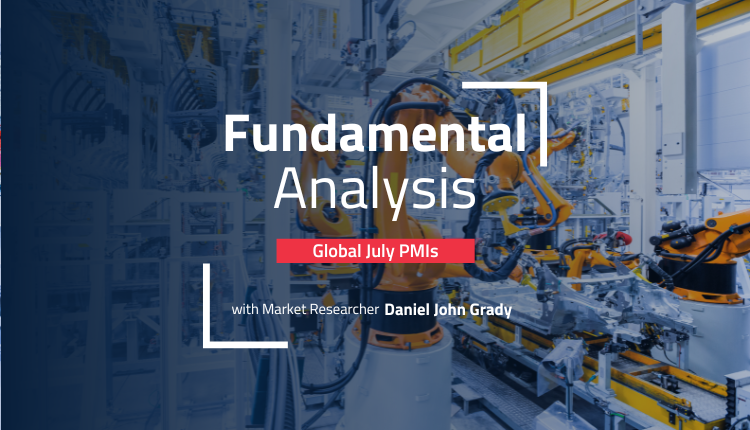 With the supply chain issues and rising raw materials costs, we can expect a lot of attention on the latest PMI figures from around the globe. Typically, they set the tone for the markets for the next couple of days.

Here are some of the major data points to pay attention to tomorrow:

Australia’s Manufacturing PMI is projected to remain effectively the same at 55.8 compared to 55.7 prior. That industries are still seeing solid growth might help offset some of the worries from higher covid cases being reported in Canberra.

The official measure of PMI came in above expectations, returning to expansion just barely. That might mean businesses are finally seeing the effects of lockdowns wearing off. Improved sentiment in Asia could be affirmed if the private Caixin survey matches the optimism. Caixin July Manufacturing PMI is forecast to show expansion by the bare minimum of 50.1 compared to 48.1 prior.

As one of the larger economies in the periphery most impacted by inflation, Spain could get some extra attention from the markets. Following dismal retail sales, it’s not surprising that Spain PMIs are expected to drop to 52.1 from 53.8 prior.

The alpine nation had managed to avoid some of the pessimism on the continent, but it appears to finally start to take hold. The EU is Switzerland’s largest trade partner. Also, the SNB’s sudden rate hike could play into the outlook. Swiss Manufacturing PMI is forecast to drop to 57.9 from 60.0 prior. Still the most optimistic in Europe, though.

German PMI is expected to affirm the preliminary number already reported last week, which was quite a disappointment from initial expectations. After reporting a sudden increase in unemployment, it’s not all that surprising. German PMI is forecast at 52.0 compared to 54.8 in June.

Despite efforts from the Chancellor to boost available funds for households, businesses still remain less optimistic. Although the UK still expected to report slightly higher PMI than its trading partners across the channel. July Manufacturing PMI in the UK is projected to come in at 53.4, down from the 54.6 at the last reading and in line with the preliminary figure.

There are two measures of PMI from the US coming out close together. The S&P Global one comes out fifteen minutes ahead, but typically isn’t regarded as the most important to the market. However, it could set the tone, if its followed up by the ISM figure also coming in around the same level. But if there is a dissonance between them, the later figure is likely to be the one that the markets take their cues from.