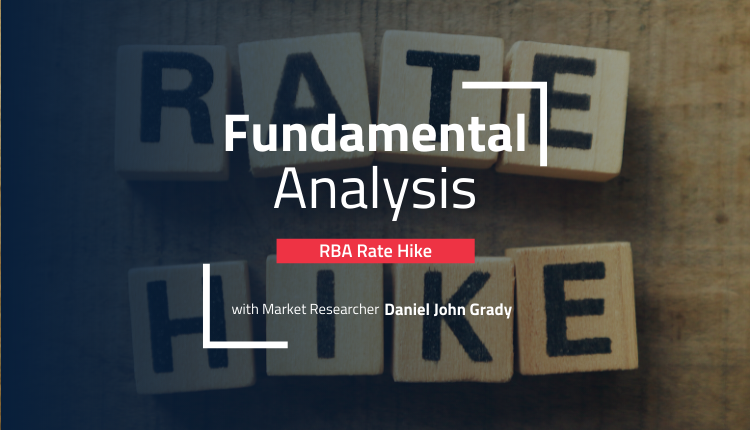 The RBA meets later today (or early tomorrow depending on where you are in the globe), and there is a very strong consensus that it will raise rates. But that doesn’t mean the markets are likely to remain calm after the decision. There are several moving parts that could potentially generate considerable volatility in AUD pairs.

What the markets are saying

Money markets are pricing in a 73% chance of a rate hike at the next meeting, which compares to 85% of Australian economists forecasting a rate hike. Which means that if the RBA fails to deliver, there could be a reversion to the Aussie as traders readjust to the rate hike outlook. But even if the RBA does raise, it’s still not clear what will happen, either.

The cash rate is currently at 0.35%, which is an unusual number. It comes after the RBA raised rates 25bps from the record low of 0.1% at the last meeting. If they decide back-to-back rate hikes, they could go for another 25bps and leave it at the unusual level of 0.6%. Or they could go for 40bps and leave it at the “usual” level of 0.75%. The breakdown among analysts for those options is 63% bet on 25bs; 31% are betting on 40bps and the remainder are looking for an even wider range.

It should be noted that there is a bit of disconnect between domestic and international analysts. Just 3% of foreign economists as surveyed by Reuters are predicting a hold; but 15% of Australian analysts predict a hold. So, that could also be distorting the markets a bit, as outsiders bet more on a stronger rate hike than domestic traders. Which could also mean a stronger reaction in the markets, depending on what happens.

The general reason given by economists expecting a hold is that the RBA might take a more cautious approach in raising rates than its peers. This is because the housing market appears to be showing signs of cooling down. Analysts arguing for a rate hike point to inflation being well above target, and rising wages. From the minutes of the last meeting, we can see the RBA was already discussing raising rates even more than they did, putting the bias in favor of tightening.

The AUDUSD has been on a near-steady upward trajectory since May 12, but that hasn’t all been thanks to the domestic situation. The dollar has also weakened in that period. Meaning that if the RBA doesn’t come in at the top of the range of expectations, the retracement in the pair could be a little less than might otherwise be expected.

The next issue is what will the RBA do next? After the last meeting, it was quite adamant about the need for further hikes. A repeat of that language could keep the AUD stronger. But, if the RBA hikes, that would be twice in a row. They might signal the need for a pause to reevaluate, by removing the “likely” from the sentence on future rate hikes being necessary.

The last time, the RBA also forecast inflation to be above target until mid-2024. If that outlook is revised to inflation coming under control sooner, it could be seen as dovish by the markets.