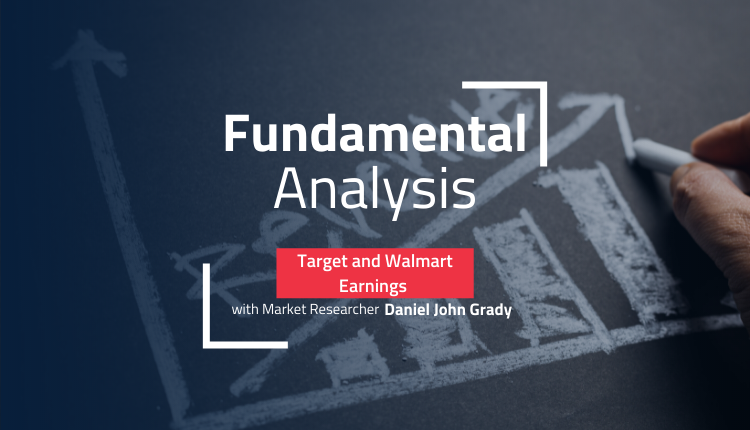 Yesterday, the Dow dropped by over 1,000 points again. The benchmark S&P 500 was down 4.0% and the Nasdaq even worse. While markets are in a bearish trend, this isn’t entirely unexpected. But such a large move after only a couple of companies reported can come across as odd for some traders. And let’s not forget the forex implications of a stock market implosion.

To know where we’re going, we must know how we got here

This isn’t a case of a few companies having a bad quarter, and their stock price pulling down the average. In fact, the two companies – Walmart and Target – reported generally OK earnings. The problem isn’t that earnings disappointed, but why they did. And because both firms are major consumer retail companies, it sheds some light on the world’s largest economy.

It should be mentioned that while Target and Walmart are getting the headlines, it’s not just those two companies. Lowe’s also reported yesterday with a similar theme. Home Depot reported a little earlier, with comparatively good results, but also warned of the problem.

The key here is comparing a couple of Target’s metrics. Same store sales, which compares how much sales have varied without distortion of opening or closing new stores, came in at +3.3%. This is in nominal terms; it doesn’t account for inflation. Meanwhile comparable average transactions were -0.6%. This means that Americans are not buying more; they simply are paying more for less things. In other words, the increase in sales and the profit from the company is due to inflation, not underlying value.

A similar pattern was reflected in Walmart’s earnings a day earlier. Same store sales increased 3.0% (excluding fuel), with the average ticket also increasing 3.0%. Americans are buying the same stuff; it just costs more. This situation was worse in international markets, where sales dropped 11.9%, adjusted for currency exchange differences. Let’s not forget that this is compared to the middle of the pandemic last year when there were still many closed stores.

Furthermore, Walmart also reported a 35% increase in inventory, reflecting an increase in the cost of goods. Across the board, businesses are reporting increased inventory. Usually this is a bad sign, since higher inventories are seen as precipitating a recession. But, given the extraordinary situation in the supply, this could be more of a reflection of retailers overstocking to make sure they can weather supply fluctuations.

The general theory of demand-side economics (favored by the White House and Fed) is that people having more money will increase buying, which in turn will motivate producers to make more. Thus, the economy grows. That positive cycle clearly isn’t manifesting; rather increased money is translating into higher prices. With nearly half the jobs going unfilled, production isn’t keeping up with demand. And an increasing amount of production is getting stuck in the supply chain and inventories.

This doesn’t necessarily mean a recession is imminent. But unless there is a change in the consumer dynamics, stocks could remain under pressure. Meaning a stronger dollar in the short-to-medium term, and continued risk-off sentiment.