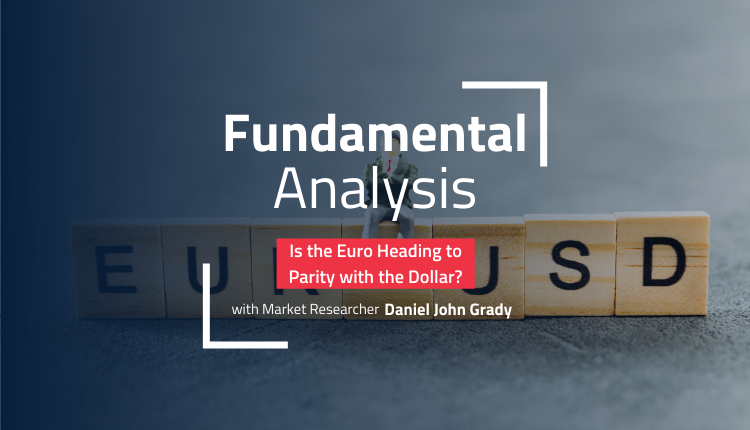 The last time the EURUSD hit 1:00 was way back in late 2002. At the time, the world was struggling with the dot-com bubble burst, and an impending invasion of Iraq. Just last week, the most traded pair dropped to the 1.04 handle, the lowest it had been in nearly two decades. And the fundamentals are lining up to suggest that the pair could keep moving lower – unless something changes.

To put it as simply as possible, the difference in inflation rates and the expected trajectory of monetary policy. Both the US and the Eurozone are facing a major inflation problem, with prices rising at rates not seen in decades (in the case of the Eurozone, not since the creation of the shared currency). The Fed has already taken aggressive action to curb inflation, but the ECB has not. In fact, the ECB is still buying assets.

The latest inflation figures show that the US’ CPI is rising at 8.5%, while in Europe it’s “just” 7.5%. The important point for our analysis here is that there is a difference of 1.0% inflation between the two economies. Put a pin in that for a second.

The increasing gulf in the Atlantic

So far, the Fed has raised rates by 75 basis points. The US never went into negative rates, and so the reference rate is now at 1.0%. Meanwhile across the pond, the ECB has kept its rates at negative 0.5%. So, the difference in rates is 150 basis points.

That means that even though inflation is higher in the US, the difference in interest rates means that investors make more money holding dollars than Euros. Well, since inflation is way above the inflation rate, technically investors lose less holding in dollars than in Euros. That actively encourages cash flows from Europe to the US, pushing the Euro down and the dollar higher by comparison.

The thing is, according to current forecasts, that gap is expected to increase through the rest of the year. The Fed is forecast to raise rates a further 6 times this year, with the interest rate reaching 2.50% in December. Meanwhile, the ECB is expected to raise rates only 3 times. Sure, that would bring rates back above negative for the first time in decades, but it would only reach 0.25%.

Given those circumstances, the fundamental pressure on the EURUSD would be on the downside, and potentially pass parity. But there are some things that could happen which could revert that situation.

Just yesterday, ECB’s Knot for the first time started hinting that a 50-basis point hike at the next meeting was possible. Investors are starting to reevaluate their projections for the ECB, with some talking about four hikes. Still, that would leave a broad interest rate spread in favor of the dollar.

On the other hand, the US already has one quarter of negative GDP growth. Combined with poor performance in the retail sector, the US could slip into a technical recession, while Europe continues to grow (albeit slowly). That situation could potentially erode expectations of further tightening by the Fed, and finally turn the EURUSD around.