European May PMIs and Potential for Stronger Euro 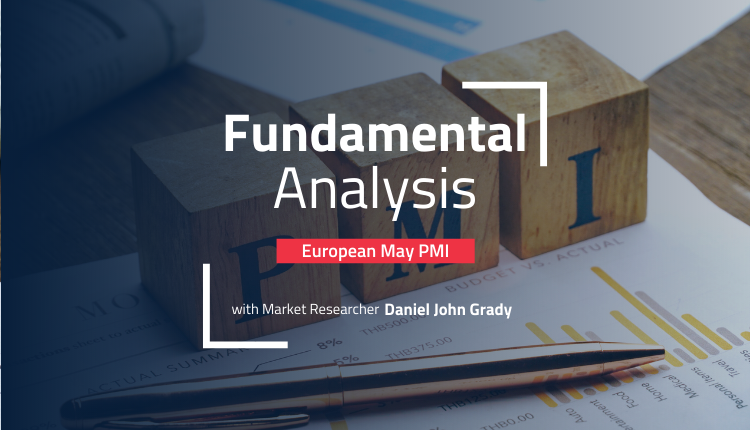 Tomorrow might have the most important data from Europe for this week. As usual for the start of the month, we get final PMI figures from the whole of the shared economy. With ECB members talking quite a bit about raising rates by 50 basis points at the July meeting, there is potential for a market shake up.

Generally, PMIs affect market sentiment. Higher PMIs typically translate into improved risk appetite, while lower PMIs support a move towards safe havens. But this time there is the extra element of inflation. Higher prices might generate a lower PMI, meaning the economy is at risk from inflation. And that would put more pressure on the ECB to raise rates. So, if PMIs outperform, it might lead to a weaker Euro; and if they miss estimates, we could see the Euro getting stronger.

Before jumping into the PMIs, Germany reports April retail sales ahead of the market open. Although the data is a little “older”, it fits into the pattern of indicators that could show the impact of inflation. Monthly retail sales in the Eurozone’s largest economy could to remain flat month over the month, basically in line with the -0.1% recorded previously.

First to report PMIs is Spain, and that could end up being the most relevant for the markets. Because if the other economies report similar results, then Spain would set the tone for the day. Spanish Manufacturing PMI is projected to remain in expansion but slip to 52.5 from 53.3 prior.

Just fifteen minutes later, it’s Switzerland’s turn to also report a drop in optimism in the industrial sector. Swiss May procure Manufacturing PMI is projected to fall to 61.0 from 62.5, which is substantially better than its trading partners. Switzerland has managed to avoid a lot of the impact of inflation from the pandemic.

Next is Italy, which is projected to report Manufacturing PMI of 53.6 compared to 54.5 previously, keeping the theme that the periphery is expected to underperform. Price pressures have been higher in Spain and Italy compared to “central economies”, and that is likely to be reflected in PMI figures.

The bigger movers and shakers

Five minutes later France reports its May Manufacturing PMI, forecast at 54.5 compared to 55.7 prior. French business optimism has been rising slowly through spring, but that could be due to the extraordinary circumstances around the elections in April. Businesses might have held back a bit of investment ahead of the electoral uncertainty, and that might explain a unique beat over expectations this month.

Germany’s Markit Manufacturing PMI might actually improve to 54.7 from 54.6 prior, albeit by the absolute minimum. Though this might be due to inorganic circumstances, as the German parliament debated and approved the €100B defense spending package, expected to benefit primarily German industrial firms.