The Week Ahead – Tactical Relief

Top consumers to use strategic reserves 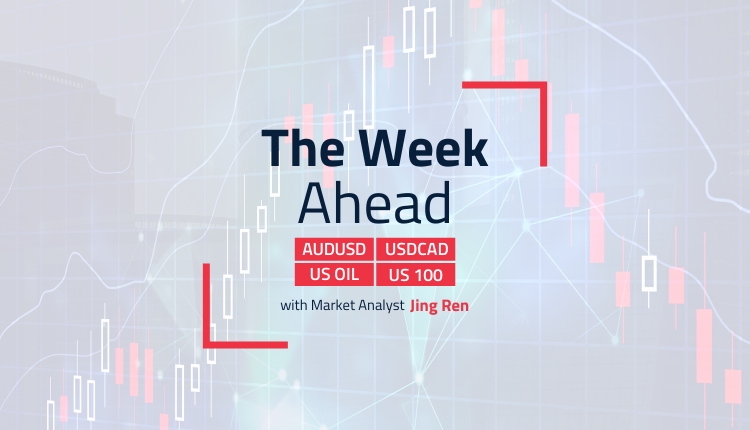 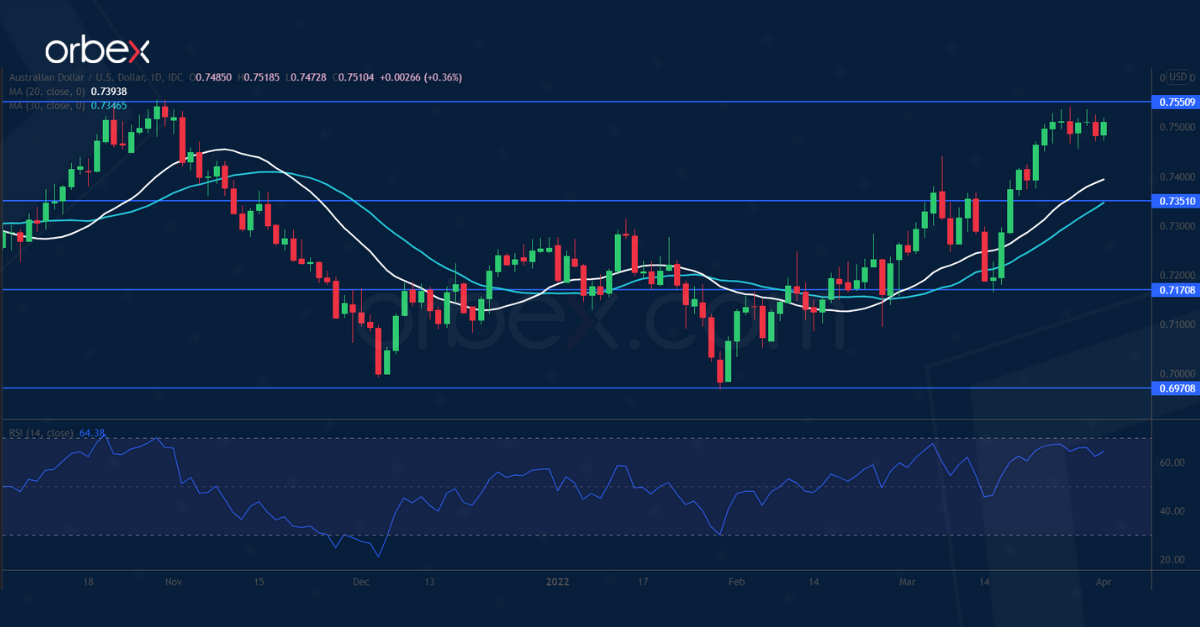 The Australian dollar consolidates recent gains ahead of the RBA meeting. The labor market is going strong with unemployment projections to hit 60-year lows later this year.

Forecasts for both economic and wage growth have been revised upward. In fact, this laid the foundation for monetary normalization. Australia’s 2022/23 budget offers a fiscal stimulus that could boost confidence. Nonetheless, this could add to inflation complications.

The government’s pre-election generosity may turn out to be the straw that broke the camel’s back, pressuring the RBA for an earlier move. The pair hit resistance at October’s high at 0.7550. 0.7350 on the 30-day MA is the closest support. 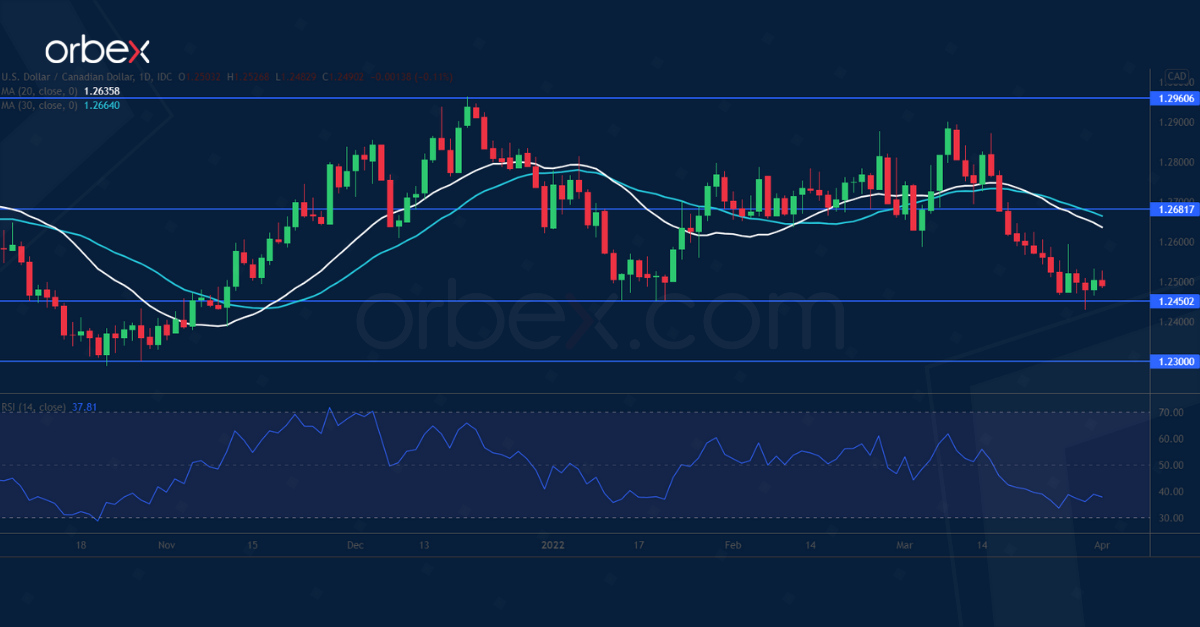 The Canadian dollar climbed as the Bank of Canada may shift to a more aggressive tightening. Canada’s inflation hit a 30-year high in February, forcing the central bank’s hand.

Traders are betting on 50 bp increments from the next meeting after BOC Deputy Governor Kozicki said the pace of rate hikes would be a focus point. The loonie’s solid performance mirrors expectations that rates could surge by a whole 2 percent by the end of the year.

The market might as well get used to the idea that fast-paced normalization is becoming a norm. The pair is testing its key support at 1.2450. 1.2680 is the first hurdle ahead.

USOIL consolidates over the release of strategic reserves 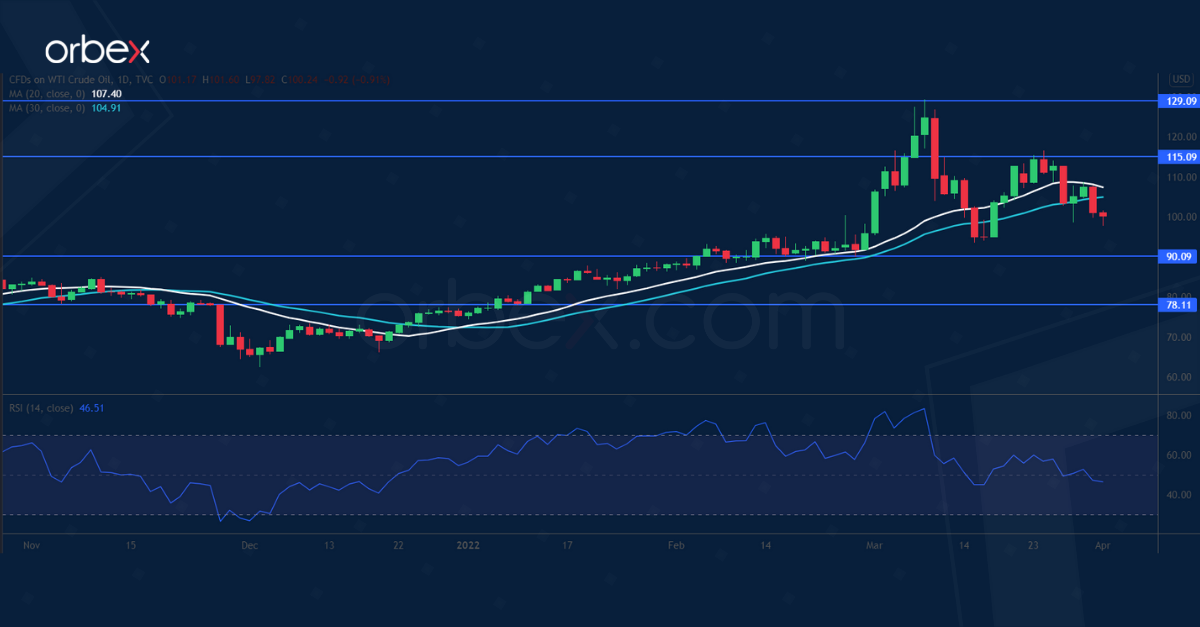 In an effort to cushion the impact of soaring energy prices, the Biden administration opened the tap from the Strategic Petroleum Reserves with a release of 1 million BPD for six months. OPEC+ members’ reluctance to increase output may force other major consumers to follow suit and tap into their own reserves.

However, such measures could only be temporary. The loss of Russian crude from sanctions may continue to support price action. WTI is consolidating above 90.00. A close above 115.00 would resume the rally.

US 100 rallies over robust fundamentals 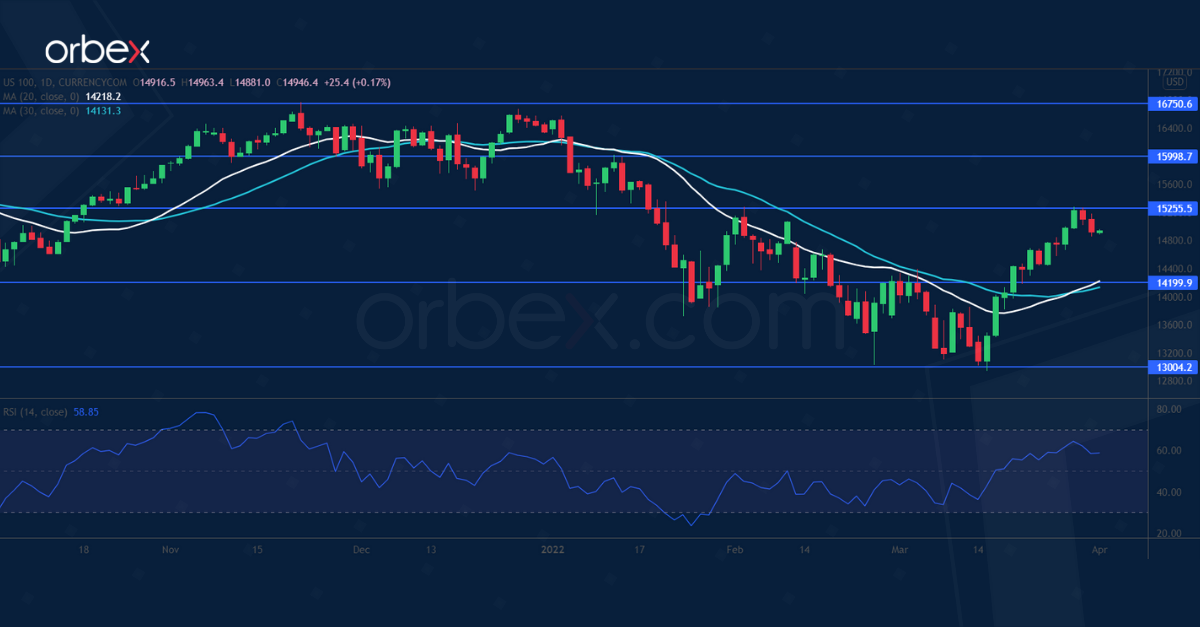 The Nasdaq 100 rises as investors bet on sustained recovery. Some may fret that the Fed tightening could stifle growth.

Nonetheless, sentiment remains upbeat as data continue to indicate robust fundamentals. Improvement in the job market would only confirm that the economy is headed in the right direction. In Ukraine peace talks ebb and flow. But Russia’s struggle on the ground and a refocus on the eastern front could be de facto a sign of de-escalation.

The markets hope that a status quo could force both sides to sit down for a concrete settlement. A break above 15250 may send the index to 16000. 14200 is a fresh support.