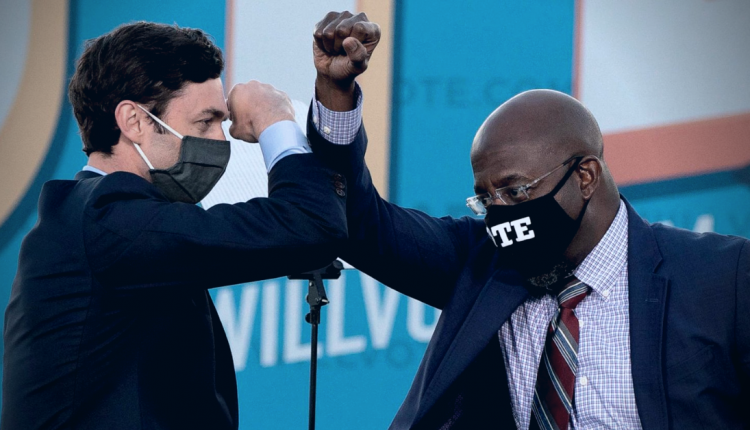 As expected, the results of the Georgia runoff and special election for two seats in the Senate were not quickly available.

Both races ended within the margin that allows for candidates to call for a recount.

But, the results are largely favoring both Democrats winning, and flipping the US Senate blue.

The market through the morning of yesterday started reacting to that conclusion.

So, what does that mean?

Given how tight the polls were, and the overall lack of confidence in polling after the general election, the market didn’t have a chance to adjust to expectations on the results.

Typically, a win for the Democrats leads to a weaker stock market. This is because investors tend to price in the possibility of higher taxes and increased regulation.

On the other hand, lifting the cloud of uncertainty helps encourage investment in the market.

Interest rates also moved higher. This is because we can now expect Democrats to be able to push through a larger stimulus package.

We were already expecting a third stimulus package, but it would have been smaller than the last had Republicans won.

There is a wide range of expectations about what kind of package the Democrats would try to push through. Some are speculating as much as $2.0T, including a round of $2,000 stimulus checks that President-Elect Biden promised in the lead-up to the election.

The increased government spending will have to come from increased debt issuance. It will likely be offset by more Fed buying.

Expectations of inflation have increased, meaning that not only do interest rates go up, but the curve steepens.

Several Fed officials have said they’d tolerate as much as 3% inflation. But the Fed might find itself in the awkward position of buying Treasuries to support government spending, while at the same time dealing with inflation that requires rate hikes.

The Democrats are expected to have a very narrow majority. As in 50-50, with the tiebreaker being the Vice President.

The narrow majority, however, doesn’t allow for radical changes unless the Democrats push to overturn long-standing Senate conventions, which moderate Democrat Senators have already pledged to vote against.

Democrats can unilaterally reappropriate spending. But they can’t increase spending or raise taxes without a 60 vote majority, which they do not have and are unlikely to get.

They can, however, cut down Trump’s regulatory changes over the last six months.

Tech stocks underperformed. They initially dragged down the Nasdaq as expectations indicate that Democrats will go after large tech firms, which they claim have too much market dominance.

There is the expectation of a modification of taxes including increased capital gains and dividend taxes. Higher volatility spec stocks could be most affected, leaving portfolio advisers to suggest shifting to value stocks.

Pharmaceutical companies may also be the target of increased regulation.

On the plus side, the expectation is that the Georgia win will allow Democrats to push through what might be called a “tame” or “watered down” version of Biden’s Presidential plan.

That would include tighter restrictions on fracking/oil production, but more spending on alternative energies. This would include subsidies for EV (Tesla potentially being a large benefactor, as well as GE).

Infrastructure could also be a potential winner, as increased federal spending is likely to go for “shovel ready” jobs creation programs.