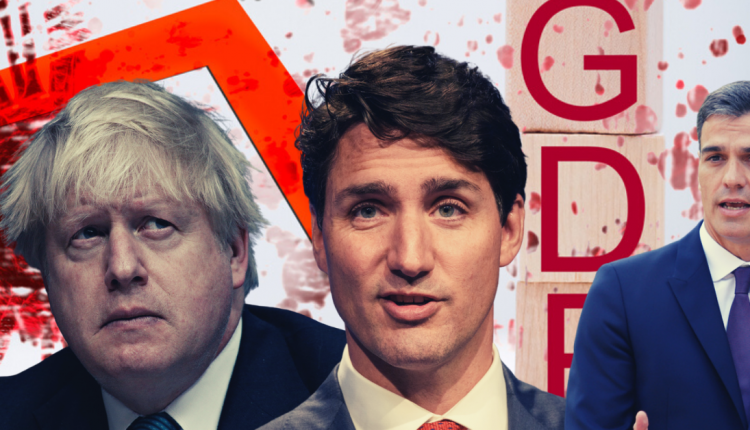 As we are coming to the conclusion of the second quarter, we are about to hit a deluge of key economic data.

This data will likely determine whether we keep trending in a V shape, or turn down into the second wave of the W. The increased uncertainty has all but erased the most recent attempt by markets to push higher, and once again we are in limbo.

Everyone expects Q2 data to be worse than Q1. However, the hope is to see a clear turn to the upside starting around mid-May. Companies that have reported so far have indicated that they’ve seen a more recent upturn in sales, though consumer demand remains lower compared to this time last year.

Let’s review some of the major data that could jostle the markets.

As it’ll be the last day of the quarter tomorrow, we have a busy data schedule ahead. Therefore, we ought to expect some extra volatility in GBP, EUR and CAD pairs.

In particular, the UK is dumping a substantial amount of information on the markets right before they open, including their customarily delayed GDP figures.

We can expect final Q1 GDP growth for the UK to repeat the preliminary figures at -2.0%. This compares to flat growth in the prior quarter, which is significant as it would confirm that the UK is merely technically escaping falling into a recession in the first quarter. A reminder that Q1 was before most of the effect of the pandemic was felt.

Projections are for annualized GDP growth to also repeat the preliminary figure at -1.6%, compared to 1.1% growth in 2019.

Spain is in Focus Again

We want to pay attention to Spain now, not just because they were one of the worst affected by coronavirus in Europe, but because their finances make them one of the more vulnerable to the economic fallout.

As with the prior recession, Spain is likely to be the bellwether of the evolution for the eurozone as it faces the diplomatic hurdles of coordinating a centralized response to the pandemic.

Projections are for the final Q1 GDP for Spain to repeat the preliminary figure at -5.2%, compared to 0.4% growth in the fourth quarter. On an annualized basis, this would imply a negative growth of -4.1%, compared to 1.8% in the prior reading. The lack of tourism during spring likely to have taken a toll on Spain’s economy.

Canada is the Exception

From Canada, we get relatively newer data, which is likely to be very interesting for the markets. April was the month when Canada was the most affected by the virus, and we can expect it to mark the low point.

The hope is that it’s all upside from here, as businesses began to reopen in May.

The consensus of expectations for Canada’s April GDP is for a contraction of -12.3%. This is in comparison to -7.2% in March. This implies a total of -18.6% reduction in GDP since the beginning of the pandemic.

The Week Ahead: Not So Fast