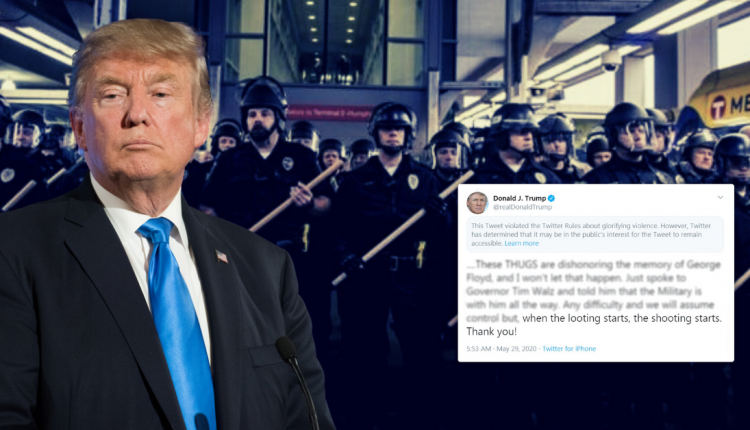 China: Trump is a Hypocrite

Relations between the US and China seem set to deteriorate further.

This week, Chinese officials criticized President Trump over his handling of the Black Lives Matter protests across the US.

Protests and riots have gripped the United States, spanning over 140 cities across seven consecutive days now.

The movements sprung up in the wake of the police murder of unarmed black man George Floyd last week.

Beijing has accused trump of hypocrisy over his aggressive handling of US protestors; this following his support of pro-democracy protestors in Hong Kong last year.

Trump, at the time, was highly vocal in opposition to Chinese police brutality against protestors. In fact, he supported a bill that passed through congress establishing US support for the rights of the protestors.

Now, six months down the line, China is accusing Trump of fanning the flames of violence and hatred in his response to the domestic protests unfolding across the country.

At times, Trump’s approach on Twitter has been overtly hostile.

The comments in the newspaper went onto highlight that in over half a year of protests and riots in Hong Kong, only one person was shot non-fatally.

Meanwhile in the US, many have been shot and several have lost their lives during just one week of civil unrest.

China Scoring Points Over US Unrest

Scenes of unrest and the mounting criticism aimed at Trump from across the social and political spectrum will no doubt be welcomed by China.

Trump has been highly critical of China over recent weeks due to its alleged role in the COVID-19 outbreak. He was also very vocally against the National Security Law approved for Hong Kong.

Tensions between the two countries have risen sharply amidst the recent crisis and Chinese commentary on Trump’s handling of this new situation is likely to stoke tensions further.

Trump did hold back last week as he announced new measures against China. However, there is room for these actions to scale up.

So far, the trade negotiations between the two countries are stable. But, if the US does increase measures against China, these negotiations could quickly fall apart leading to a return to the trade war.

The Chinese stock market has been making a firm recovery over recent weeks. This comes following the plunge seen earlier in the year during the worst of the COVID-19 outbreak.

Price has rallied off the 2681.1 level support and is now once again testing the 2915.64 level highs. If price can sustain above this level, focus will be on further upside. A challenge of the bearish trend line is the next focus ahead of structural resistance higher up at the 3072.61 level.