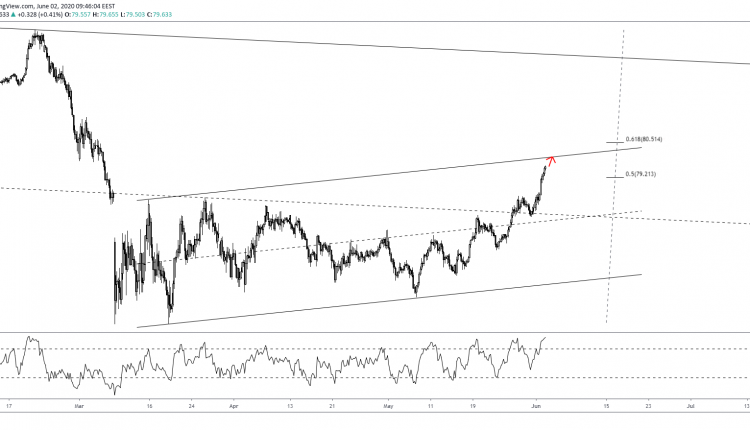 CADJPY has turned bullish since the 74.75 low was reached on May 7.

Despite the pair trading within a descending channel (started Oct 3,’18), prices recently crossed above the median regression line. The breakout was also supported by a retest of the 77.70/80 region.

With price action suggesting an upside bias in the medium-term, chances of the pair reaching the upper channel are increased. The level is indeed attractive near the 80 psychological resistance.

In the short-term, the upside scenario looks supported.

Here, we use more recent reference prices to build an ascending channel.

The momentum looks strong in the short term which can foretell two things: one – bias is going to remain unchanged (within the channel); two – a correction is likely depending on how close the price is to the upper channel.

That said, in the case of bulls taking over the 80 level with a false break formation, we can expect a correction and a continuation to fresh highs.

If, however, bulls breakthrough without looking back, we can expect the prices to get to the upper channel and then retrace (it could be anywhere above the 80 level, to the 61.80% and higher).

Should we see a weak first attempt to take over the 80 region, we can expect a pullback down to the median regression line near 79.21. Lower lows near the lower channel can be expected too.