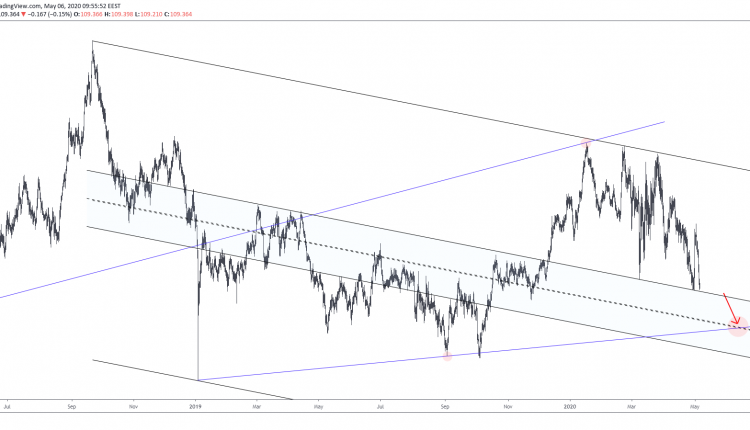 After two sound tests on Mar 09 and Apr 29 – respectively – bears are re-attempting to penetrate the highly active regression zone.

A valid break of the 109 level could allow bears to penetrate the regression channel. This will encourage additional shorts. Depending on volumes, prices could reach at levels below the 108 round support.

As the 2-hour analysis below indicates, more weakness could bring the pair near 107.81. This is the intersection between the median regression line and the ascending trendline starting Jan 02, 2019.

A shorter-term descending channel suggests that CHFJPY could remain bearish in the medium-term too.

Despite looking bearish also in the short-term, we could see prices bouncing off the regression channel for a pullback. The potentially short-lived upside could see an end near the 109.50 resistance (turned support) – this is the intersection level between the resistance and the median line of the short-term descending channel.

Note that the pullback could occur even after bears have penetrated the channel, forming a false-break within the regression channel. The 109.50, however, will have to be used as our benchmark in either case. A break higher, for example, could be an invalidation of the idea.

A valid entry into the regression channel could take out the 108.76 level first. There, further clues will be provided by price action.

A Very Bad Day For US Data