USDJPY Biased to the Downside 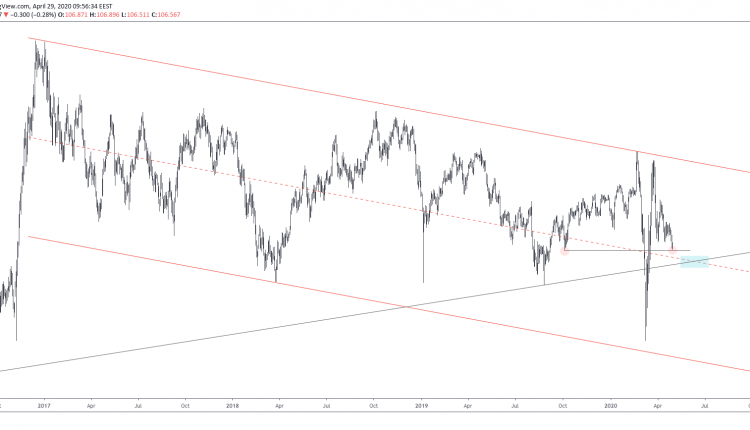 The descending channel starting January 3rd, 2017 suggests that the 106 round support is a critical intercession level of the center channel trendline and price.

For USDJPY to reach out to the said level, bears need a successful break of the 106.45 support formed on October 3rd, 2019.

We could expect a valid bearish breakout to send the pair near the intersection of the center channel trendline and the ascending trendline starting June 23rd, 2017. This comes just shy off of the 106 level, near 105.80 (highlighted area above).

The 2-hour chart below indicates that the 106.45 support is also the 50% Fibonacci retracement of the 101.70-111.70 bullish move. This makes the support stronger which increases the chances of a short-term bounce. But we could expect the upside to be limited to the channel extremes. Otherwise, invalidate this idea.

Both the longer and shorter-term channels have a bias to the downside. So, it would be no surprise if prices slice through the 105.80 level and reach out to the 61.80% Fibonacci retracement at 105.20.

This move, however, might prove to be a valid bearish breakout. There, we could expect the center trendline of the short-term descending channel to be tested. If there is no firm test, prices will likely give in to bearish pressures.

Otherwise, we could expect 105.20 to offer a short-term opportunity to the upside at least.