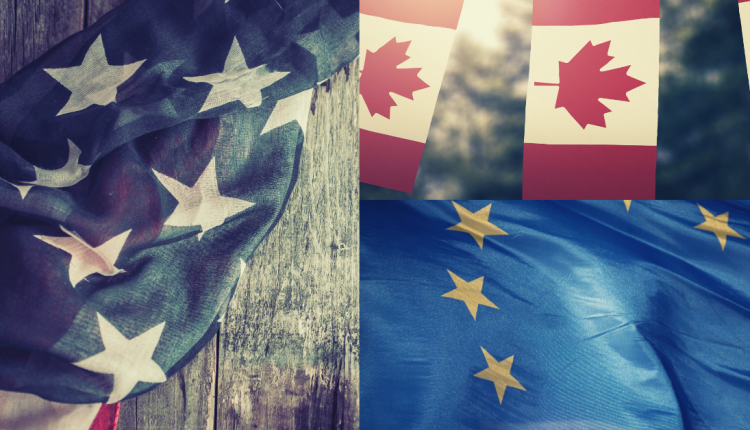 It’s here. After all the talk about recession and how bad the COVID-19 effect will be on the economy, we get the first official GDP numbers from the two largest economies in the world (and Canada; we mustn’t forget Canada).

The outbreak didn’t start biting seriously in Europe and in the US until March. But, already in February, there were concerns regarding supply chains.

In many cases, formal lockdowns didn’t happen until mid-March (though voluntary social distancing and closures had started before then.) So, presumably, Q2 will be worse.

Not only do we have the market reacting to the data, but also the expectations it creates for the quarter we are going through.

How bad is it?

We have the majority of fundamental data in so far, which gives economists a pretty good idea of what the data is going to look like. That means the market is likely adjusting to the outlook as well. With all the talk about how negative the measure could be, there is likely a strong upside potential in the reaction.

US unemployment figures have skyrocketed, the EU has yet to agree on a financing mechanism, and Canada’s cases started to trend higher later. There are plenty of reasons for the market to have priced in disappointing data. With the massive amount of money being thrown at it from central banks, there is a chance many traders will see the Q1 results as a “bottom” and push the market higher.

The question is how much of a miss of expectations would disappoint the market to send it down again. Mind you, this is the “first look” at the GDP figures, and they could be revised in the future.

First to report is the US, with the consensus among analysts projecting -4.0% annualized growth rate, compared to 2.1% recorded in the fourth quarter. That would be the worst performance since the sub-prime crisis.

Remember that the US didn’t start significant lockdowns until March 16th. However, the dire situation was already apparent to markets as early as Feb 24, when the stock market started its precipitous fall in response to tightening liquidity as companies withdrew funds in anticipation of mitigation measures.

A day later, the euro area reports, with a consensus of quarterly economic growth of -3.4% compared to growth of just 0.1% in Q4. On an annualized basis, this would be -2.9% compared to 1.0% prior.

The EU started lockdowns almost two weeks prior to the US, and would have more of a negative impact. This would be the worst result since the beginning of the euro currency.

A couple of hours later it’s Canada’s turn with relatively upbeat projections: quarterly GDP is estimated to come in at 0.1%, which would match Q4 of last year.

Canada didn’t see a major increase in cases until as late as March 22 and didn’t issue a federal isolation order until March 25, which explains the expectation of minimal impact on GDP.