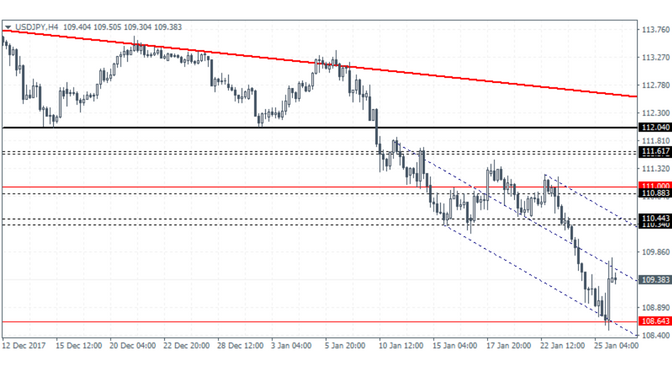 The U.S. dollar was met with another volatile day as late in the day the U.S. President sought to clarify the Treasury Secretary Mnuchin’s comments on preferring a weaker dollar. The greenback was seen extending declines earlier in the day as the ECB left the monetary policy unchanged. With Mario Draghi not addressing the exchange rate of the euro, the common currency briefly rallied to a fresh 4-year high only to reverse the gains by the close of business.

Looking ahead, GDP data across the UK, Canada and the U.S. will keep the markets busy. The UK’s preliminary GDP is expected to show that the economy advanced 0.4% on the fourth quarter. Canada will be releasing the inflation data which is expected to show a 0.3% decline erasing the increase from the previous month. The U.S. advance GDP report is expected to show a modest increase of 3.0% in the GDP. Later in the day, BoE and the BoJ governors will be speaking at the World Economic Forum in Davos.

USDJPY (109.38): The USDJPY also recovered from the lows of 108.49 and managed to close on a bullish note for the day. Price action however remains doubtful for further gains to the upside. The resistance level at 110.70 could be seen capping the gains in the short term, while to the downside, a retest of the support at 108.26 could be likely. In the near term, we expect USDJPY to maintain a sideways range within these levels. A higher low off the current rebound on the 4-hour chart could indicate a near term rally to 110.44 – 110.34 level.