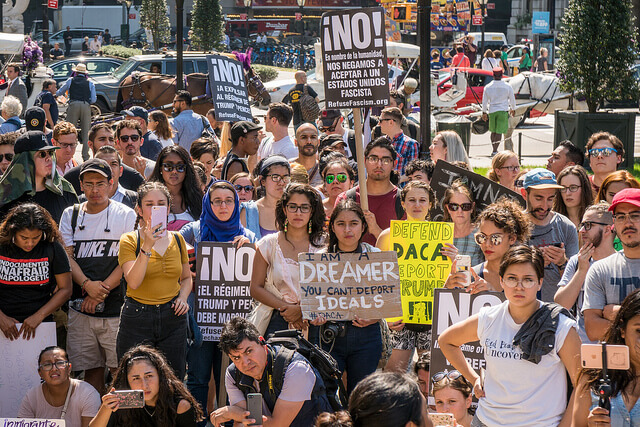 Four days after the US government was shut down due to immigration-driven disagreement over extending Federal funding, the US dollar sustained a major blow resulting from protectionist remarks by US Secretary Steven Mnuchin and Commerce Secretary Wilbur Ross.

Resurfacing political dissent is nothing new. Yet, when it threatens the functioning of more than 25 Federal departmental agencies and forces hundreds of thousands of Federal workers into unpaid leave, then it’s a serious problem, especially during a mid-term election year.

Remarks by politicians expressing support for domestic industries are also nothing new. So the occasional expression of economic realities by the Treasury chief, that a weak currency helps exports (even if it goes against the supposed official tag line that a strong USD is in the economic interest). However, when the Commerce secretary embarks on an elaborate explanation justifying measures at trade wars on the grounds that: “… trade wars have been in place for quite a little while; the difference is the US troops are now coming to the ramparts”, then it’s a problem. Not only for the global economy, but especially for the US currency.

Since the 1990s, currency traders have consistently punished the US dollar on each occasion where the US administration adopted protectionist measures (Ronal Reagan vs Japan in 1983-84 and George W Bush with foreign steel in 2002). 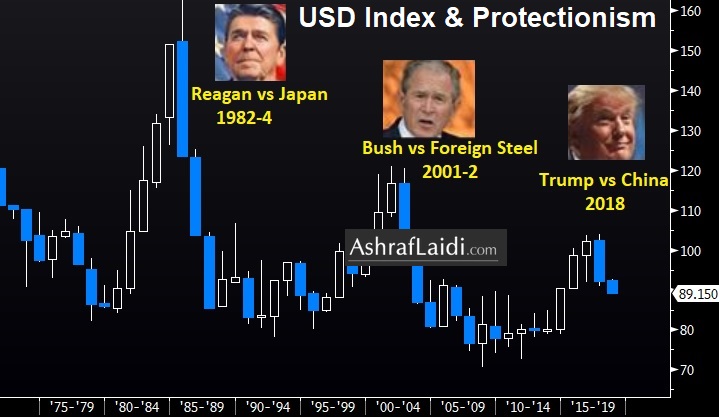 Trump’s first trade action is a 30% tariff on imported solar panels and 50% tariffs on large residential washing machines. China will be the target of the tax on solar panels, while South Korea and Mexico will be affected by the tax on washing machines. I will neither focus on the fact that higher tariffs will drive up prices on US consumers, nor tens of thousands of US jobs related to installing solar panels that will be lost as collateral in the trade wars.

Interestingly, the aforementioned trade tariffs are not so much of a threat to China’s industry as they would be a danger to US companies seeking to benefit from the rise of China’s consumers. China could begin their own efforts at trade wars by threatening the US to move away from Boeing towards Europe’s Airbus, slash its purchases of Apple’s products and reduce its demand for US grains.

Most Democrats opposed the bill to extend government funding because their efforts to preserve protections for over half a million of mostly young immigrants, known as Dreamers. These efforts were rejected by President Trump and Republican leaders. The shutdown ended on Monday, after Senate majority leader Mitch McConnell assured the Democrats that they would hold a debate and a vote on immigration in return for ending the filibuster of a short-term funding deal until February 8.

But, unlike previous battles with Democrats on tax reform and Obamacare, the impasse over Dreamers does involve trump going against sectors of the Republican base.

Trump faces the predicament of having to choose between avoiding upsetting his base and doing what is “right” for immigrants seeking sanctuary in the US. Democrats are not only aware of this, but also of Trump’s -40% approval rating during a midterm-election year. This should spur them into playing hardball ahead of the February 8 deadline and raises the possibility of Republicans losing Senate majority in November, not a helpful outcome for markets or the US dollar.

As for trade action, Trump’s tariffs in a mid-term election are a blatant parallel to George W. Bush’s trade wars declaration on foreign steel in late 2001 aimed at securing victory in the bankrupt Rust Belt states ahead of the 2002 mid-term elections. The US dollar peaked in February 2002. By the time the World Trade Organisation punished the US with $2bn in sanctions, the US dollar had lost 12%, before falling into a 7-year bear market. And, unlike the China of 16 years ago, the China of today will not take things sitting down. Stay tuned.