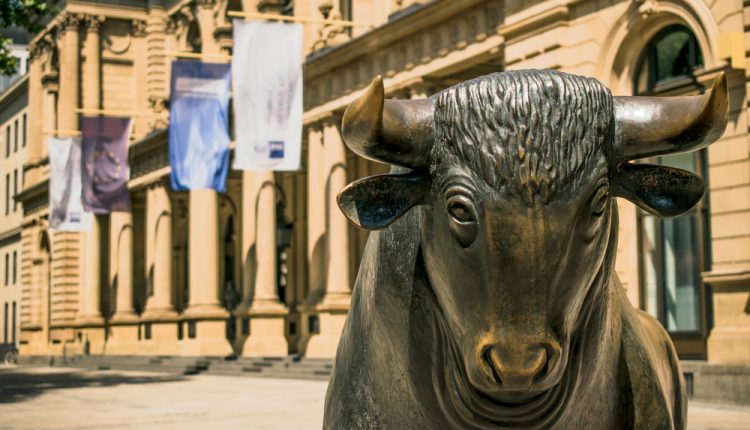 The German DAX has continued to post steady trend in the past few weeks. Despite the mixed reaction to the German elections in late September, the leading German index managed to hold on to the gains.

After breaching past 12669.0 levels, the German DAX index has hit the target level to the upside as outlined in the previous commentary. With the political risks now taking a backseat, focus will turn to the ECB’s monetary policy meeting due later this month.

Last week the markets saw the ECB’s meeting minutes released. Contrary to market expectations, the meeting minutes showed that the European Central Bank officials were hoping to taper its bond purchases at a gradual pace.

The markets posted a strong rally in the initial aftermath of the hawkish speech by ECB president Mario Draghi few months ago. This speculative rally came about as the markets were pricing in the QE tapering.

However, officials maintained that the pace of tapering will be only gradual. This was consistent with the underlying theme from the ECB which has repeatedly mentioned that it will scale back its QE purchases based on the economic data.

At the October ECB meeting, the markets currently expect the ECB to announce a 20 billion euro tapering plan. This is expected to start from January 2018 and will bring down the ECB’s bond purchases to 40 billion. The tapering marks nearly half of the stimulus program being cut when the ECB initially started with its bond purchases.

Further scope for tapering is likely to come depending on how the Eurozone economy will develop into the second quarter. This means that with the markets pricing in the taper, the scope for the upside is limited.

Despite the German elections maintaining the status quo, the political headwinds have only declined to the backdrop. Just a few weeks ago, the region of Catalonia in Spain held a referendum that was deemed unconstitutional.

Marred by violent protests, the referendum showed a 90% support from the 2.3 million people in favor of forming an independent state. Next year, Italy will be holding the general elections. Currently it is scheduled for some time in May. With the recent trend of growing support for populist parties, the Italian elections could come as the next major event risk for the Eurozone.

From a technical perspective, the German DAX could be seen attempting to post fresh highs. This is of course subject to the technical test of support at 12669.0 level which previously served as resistance.

Establishing support at this level could be critical for the German DAX and validates the upside bias. However, a risk of a breakdown below 12669.0 could mean potential correction in the medium term.

Major support is seen forming at the 11962 – 11895 region that was briefly tested. A decline to this level could also lead to the possibility of a head and shoulders pattern that could form, based on the current highs already in place.

This potential outlook could probably coincide with further developments on the issue of the Catalonia referendum as well the political landscape in Italy next year. For the near term, the German DAX looks to be carving out fresh highs, but the outlook remains a bit blurred.

This is partly due to the ECB reducing the stimulus program and also the exchange rate of the euro which has to be considered. Still, watch the German DAX although the bias remains to the upside. Any signs of declines in the medium term outlook could however see the index falling back to the 11962 – 11895 support level.

What Was Lost in Friday’s US Jobs Report?