Germany Posts Trade Surplus as Officials Hit Back at Currency Allegations From the U.S. 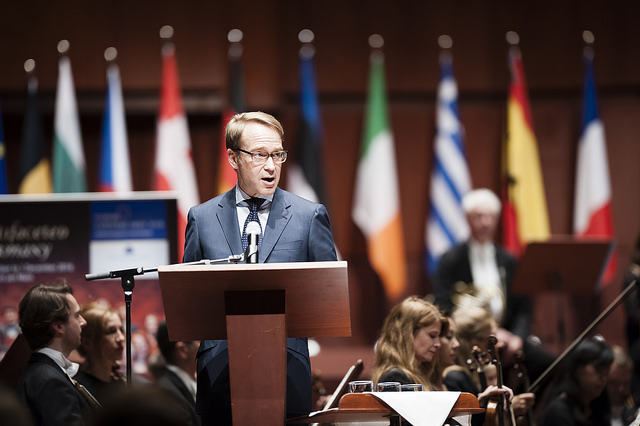 Jens Weidmann, the head of the Bundesbank. Image via European Central Bank

Jens Weidmann, the head of the Bundesbank, Germany’s central bank responded to allegations of currency manipulation last week. In a sharp statement, the head of the Bundesbank called the allegations “more than absurd” and “unsettling,” joining other central bank officials from around the region, including the ECB president Mario Draghi, who said the day before that the European Central Bank did not intervene in the currency markets since at least 2011.

“The charge that Germany exploits the U.S. and other countries with an undervalued currency is more than absurd,” Mr. Weidmann said, noticing that the U.S. enjoyed the benefits of a weaker exchange rate for more than a decade.

The reaction from the German officials came as Peter Navarro, the head of the U.S. National Council commented that the euro was “grossly undervalued” giving German firms an unfair advantage over other foreign competitors.

Mr. Weidmann said that the recent appreciation in the U.S. dollar against other currencies was on account of domestic issues such as making political announcements that drove the exchange rate higher and not because other central banks were attempting to weaken their respective currencies.

The German finance minister Wolfgang Schäuble was however very blunt as he reacted to the allegations by shifting blame onto the ECB. “When ECB chief Mario Draghi embarked on the easy-money policies, I told him that he would drive up the German trade surplus,” the German finance Minster said, noting that he didn’t want to be blamed for the consequences of the policies undertaken by the ECB.

While Mr. Weidmann defended the monetary policies and deflected the allegations of benefiting from currency manipulation, the economic data released last week had a different story to tell.

According to official data, Germany’s trade surplus rose to a record high in 2016 to €252.9 billion breaking the previous record of €244.3 billion in 2015. German exports increased 1.2% and imports increased 0.6% compared to a year ago in 2016. Many industry experts view this latest data to fuel more tensions between Washington and Berlin. For the same period in the U.S. trade deficit widened the most since 2012. Official records released last week showed that the U.S. trade deficit increased $502.25 billion for the whole of 2016.

The euro has fallen from the peaks of $1.40 in early-mid 2014 to around $1.07 in a matter of just two years. Although Germany has been a staunch opponent for a weaker euro and has often criticized the ECB’s policies, the slump in the exchange rate has been a boon for Europe’s strongest and largest economy. The decline in the exchange rate and the trade surplus coincides with the European Central Bank’s QE program which launched a massive 2.3 trillion euro effort to bolster the weak economy.

[Tweet “Weidmann ruled out any deliberate manipulation of the exchange rate”]

Germany acknowledged this fact, however, noting that the ECB’s policies had helped to give it a competitive edge in the international markets, but Mr. Weidmann who sits on the 25-member governing council of the ECB ruled out any deliberate manipulation of the exchange rate.

Mr. Weidmann also highlighted the benefits the U.S. received as a result of Germany’s trade surplus. He said that German firms invested more than €270 billion in the U.S. which led to the creation of more than 80,000 jobs. He called it a “win-win” situation.