UK Votes to Leave the EU 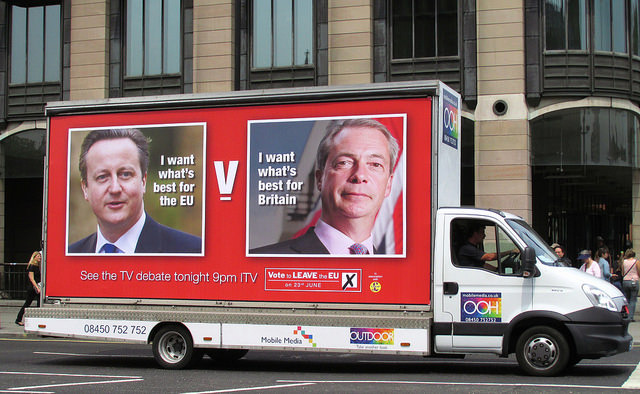 In a tight race, the markets were taken by surprise as the UK voted to leave the EU. Although counting is still underway, the ‘Leave’ camp was seen leading with 51.70% against the ‘Remain’ camp’s 48.3% with 98.4% of votes counted. The ‘Remain’ camp passed the mid-point the first. The official results are expected to be announced at 0900 UK time.

Besides upsetting the geopolitics, the Brexit vote also threatens to spark turmoil in the UK with some political leaders already calling for the British Prime Minister, David Cameron to resign. Calling the Brexit a victory, Nigel Farage, one of the more popular faces of the Leave camp said: “Dawn is breaking over the independent UK“. The UKIP leader said, “[June 23] go down in our history as our independence day.”

The markets had previously braced for a Bremain with GBPUSD touching new yearly highs of 1.501. The gains came as the last set of opinion polls showed that the Leave camp gained an edge, which saw the markets turn to a risk on sentiment. However the sterling started to plunge as the polls closed and voting got underway. GBPUSD touched lows of 1.322, down 9.63%. The euro fell to 1.0911 after briefly testing the highs above 1.141. Meanwhile, EURGBP rallied strongly testing highs of 0.830.

The global equity markets also plunged following the news developments. The Nikkei225 is down 8.28% while the Shanghai Composite is down 2.92% and the Hang Seng losing 5.64%.

The yen and gold strengthened on the news. USDJPY briefly fell to 99.01 lows before managing to recover. BoJ Governor, Kuroda was the first central banker to hit the wires. He said that the Bank of Japan remained ready to offer liquidity if needed. He said, “The BOJ, in close cooperation with relevant domestic and foreign authorities, will continue to carefully monitor how the (British referendum) would affect global financial markets.”

Gold prices meanwhile rocketed to a 2-year high touching 1358 before pulling back lower.

The UK is now expected to activate the Article 50 of the Lisbon treaty which sets the countdown for negotiations with the EU to part ways.

Many analysts were also caught off guard with the outcome of the referendum. Kathleen Brooks, market analyst at City Index said: “This is a historical moment for the political establishment in the UK and in Europe, however, this is also a historical moment for the financial markets.” She said, “The FX markets at the pound is the cleanest way to express a view on the UK, and goodness, it has reflected a massive loss of confidence in the UK this morning.”

Later in the day, central bankers are expected to speak, with Mark Carney, the Bank of England Governor expected to make a statement once the official results are announced.