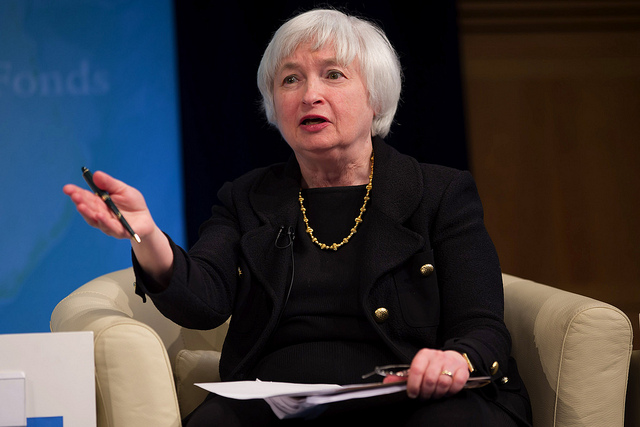 Federal Reserve Chairwoman, Janet Yellen appeared before the US Senate banking committee yesterday as part of a two-day event. In her speech to the committee yesterday, Ms. Yellen did not waver from the comments made after the FOMC decision last week. She said that the Federal Reserve would be closely watching the developments surrounding the labor markets which seem to have slowed down in recent times and also keeping an eye on inflation and the global economy.

Reflecting on the speech, ANZ analysts said, “Fed Chair Yellen’s testimony to the Senate overnight offered few new clues on the path of normalization. But there was a subtle change in tone from being on watch for whether, rather than when, the U.S. economy would show clear signs of improvement. Still, she looks in no hurry to normalize U.S. rates”

The sterling remained flat for the most part on Tuesday and Wednesday after posting strong gains on Monday. The pound surged as new opinion polls showed that the ‘Remain’ camp managed to gain a narrow lead. Market sentiment also slightly improved after the new release of opinion polls with USDJPY managing to rise above 104 after previously trading at fresh 18-month lows of 103. However, regardless of the modest improvement in sentiment, many still expect the Brexit referendum vote to be a close call.

Many institutions and investors weighed in on Brexit with some expecting the Bank of England could be forced to restart quantitative easing if Thursday’s referendum vote sees the UK leave the EU. Although the markets remain relatively stable up until now, many expect volatility to pick up starting tomorrow once the polls open. UBS warned its clients, “A U.K. vote to leave the EU Thursday could see extreme volatility in the foreign exchange markets, meaning trading may temporarily be impeded. In the event that extreme market moves occur in an environment of limited liquidity, our principal spreads may widen for both electronic and voice trading, liquidity may reduce and prices may turn indicative (i.e., non-tradable) for periods of time.”

Draghi: ECB on standby with all contingencies

The European Central Bank President, Mario Draghi in a speech to the European Parliament yesterday was optimistic that inflation would rise to the mandated 20% target rate. He said that further monetary policy measures would be taken if need be and that current policies will remain accommodative for as long as needed. His speech also touched upon the UK referendum vote, saying that the ECB is ready for all contingencies depending on the outcome of the referendum vote.

On economic recovery in the Eurozone, Draghi said that recovery continues to expand at a moderate but steady pace and that the recovery was also supported by lower oil prices and the central bank’s expansionary monetary policies. He also said that further monetary policy stimulus from the ECB was in the pipeline after the ECB recently started purchasing the corporate bonds under its QE program.

He also maintained his view that further government action was indeed in order to boost the investment framework besides overhauling the tax systems and insolvency frameworks. He said that there was a need for more public investment especially in areas that are conducive to growth in countries where public finances allow.

Analysts at ING note that in the event of a vote to stay in the EU on Thursday, the sterling could rise nearly 4% or towards $1.52, compared to the current levels at $1.465. Analysts note that the pound would benefit as the markets quickly discount the ‘Brexit risk premium’ but could also gain from the broader risk rally which could keep equities supported. ING also cautions that the markets will start to price in a Bank of England rate hike over the coming quarters. “Some cautious tightening is likely to be priced in … Hence, the U.K.-U.S. rate differential would move in favor of GBP,”  ING analysts said.

UK Referendum Vote – How it all plays out