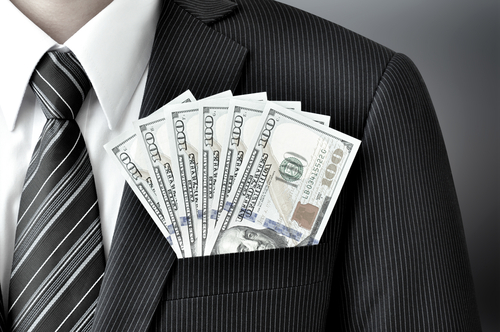 The US Dollar Index is currently trading at a critical level as far as technical analysis is concerned. The first chart below shows the daily chart plotting the Andrew’s median line. Here we notice the recent top near 98.25 failed to hold prices resulting in a sharp bearish decline on Tuesday. Prices are currently attempting to rally back in what looks like a three candlestick pattern reversal attempt. However, because price is trading just below the major support/resistance level at 97.5, we need to see a bullish close today preferably inside the resistance level in order to ascertain the view to the upside.

Failure to break above the resistance zone is most likely the first indicator that could signal a decline in the US Dollar back to the next support at 96.33.

On the H4 chart time frame, we notice price breaking the minor rising trend line, which is steeper. This break of the trend line has resulted in a period of consolidation. There is also bearish divergence from the RSI, which failed to confirm the new highs in the market. Thus, this is potentially indicative of a decline towards 96.6 through 96.39 level of support/resistance. We notice the confluence of support at 96.33 from the daily chart to the support zone of 96.6 – 96.39 from the H4 chart, thus indicating that the US Dollar Index could potentially see some downside in the near term.

While the price zone between 96.33 could be well supported, there is a risk of failure in the support zone. This could potentially see the US Dollar Index decline further to the next support level at 95.5 through 95.20. To the upside, it is evident that a bullish rally could possibly see the US Dollar Index post new highs above the previous peak. We determine that the US Dollar could at the very least test the resistance near 98.75.

Fundamentally, this week has been relatively quiet with no major policy decisions or tier-I market moving events. But the focus shifts next week as the US FOMC meets for its monthly monetary policy. It is widely expected that the Fed would stand pat on policy at the July meeting thus setting the stage for a September rate hike. Going forward, the markets are likely to scrutinize the economic data from the US including the monthly jobs report and the PCE inflation data. A beat on estimates could bring about a very bullish sentiment in the markets that could warrant a rate hike at the September’s FOMC meeting.

Janet Yellen has been repeatedly hawkish on the economy and has used almost every opportunity to convey to the markets about a rate hike in September, albeit only if the economic data warrants. As such, the unemployment and inflation data in the coming months will be very crucial and the US Dollar is likely to remain very volatile as the US Central Bank prepares for a rate normalization.

Four-Decade Low in US Jobless Claims