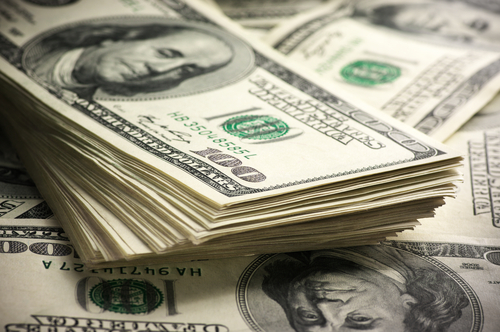 The US Dollar Index, broke out to the upside within the sideways price action seen the week before. However, price is back into a previously held resistance level between 97.85 through 97.35. Plotting the median line to the new price action, we need to see the Dollar Index break out from the resistance above 97.85 in order to post further gains.

The next major resistance comes at 100.20. In the unlikely event that the resistance at the current level holds the rally in prices, US Dollar Index could risk a break out from the rising median line which could potentially see a decline back to retest the support near 96.33 region. However, the bullish momentum is likely to continue considering the strong bullish candlesticks posted on the daily charts, which saw a break out after price formed a strong bullish engulfing pattern a day before.

On the H4 chart, price action saw a brief retest to the minor support near 95.85 – 95.6 before posting a strong rally. Currently, price is trading near the previous highs of 97.6 which could act as some kind of resistance in the event price fails to clear this level. This could possibly pose the risk of the US Dollar declining back to the previously broken resistance at 96.55 which could now be tested for support should the minor support near 97.35 give way.

On the longer timescale, the US Dollar looks to be resuming its bullish rally and this could be confirmed if price manages to clear resistance near 97.5, which could open the way for another attempt to clear the previous support near 100.

On a fundamental note, the Greenback got a major boost this week by Fed Chair Janet Yellen, who remained optimistic that the Fed would hike rates this year. While the comments were initially made at a speech in Cleveland, Ms. Yellen stuck to her narrative, testifying to the Senate Banking Committee. However, Ms. Yellen sounded a bit of a caution noting that the monetary policy would remain accommodative and that rate hikes would come only if the economic data warrants. She also noted that inflation would longer than expected to reach the Fed’s target objective of 2% inflation rate.

The markets are currently expecting the Fed to stay on course with a possibility of a rate hike in September. So far economic data has been relatively ok, but nothing stellar. In this aspect the upcoming economic data, most importantly, the July payrolls report and inflation needs to pickup in order to validate this view.

Most recent economic data showed that the US retail sales fell in the month of June, slowing down by 0.3%, the weakest since February this year. The weak retail sales data sparked concerns that the US economy could start to slowdown again.

Canada lowered the interest rate, the US wants to raise it