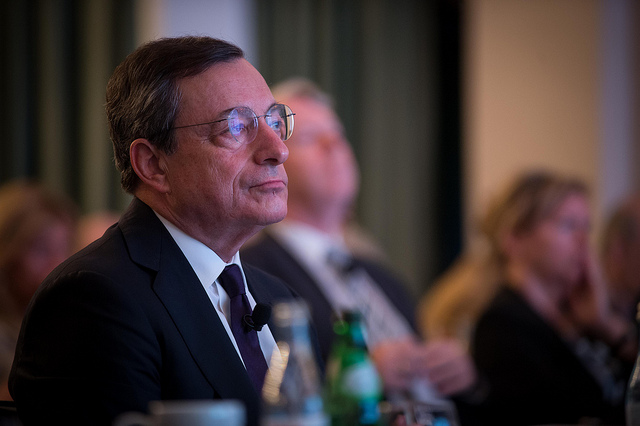 The European Central Bank’s monetary policy meeting today is quite likely to pass off as a non-event as some of the major Eurozone member nations gear up for elections that could potentially unsettle the current status quo.

The European Central Bank is unlikely to add further to the turmoil especially with no major reasons to justify any policy changes. On the contrary, the ECB governing council is expected to deliberate on the recent string of inflation numbers which have been steadily rising.

Despite headline inflation rising to 2% in February (flash estimates), core inflation figures have remained stubbornly anchored to 0.9% and hasn’t budged much. The ECB is therefore not expected to make any changes but could give moderate inflation projections in the near future.

But given the uptick in headline consumer prices, the markets are likely to be more vulnerable to any hawkish rhetoric from the ECB.

On the same note, Draghi is also likely to dismiss any discussions on exiting from the current QE purchases and could clearly mention that no such talks of further tapering were discussed at today’s meeting. Although a continued uptick in inflation could potentially increase the odds of further tapering which could happen later this year or towards early next year.

Oil prices are likely to continue playing an important role in supporting the near-term inflation forecasts. Energy prices have been higher, mostly on higher oil prices which rose more than the ECB’s forecasts from December.

This is attributed to the fact that the recent surge in inflation from higher oil prices could be offset by other factors which could see inflation moderating as a result over the longer term horizon.

Many institutional banks have already upgraded their view from the ECB tomorrow. Goldman Sachs expects the ECB to raise the deposit rate no sooner than late 2019, while Morgan Stanley expects the rate to be held at -0.4% through next year. BofA Merrill Lynch experts believe that the ECB could be seen hiking rates only after it completely tapers the QE program.

While the expectations are starting out to be hawkish, it increases the scope for a big disappointment for the markets tomorrow, if the narrative from the central bank fails to match the market expectations. And there is a strong scope for this to happen, especially with just a week to go before the Dutch elections due next Wednesday.

EURUSD has remained range bound since Friday’s gains, but prices are seen steadily giving back those gains already by Tuesday this week. Any gains off the ECB’s meeting today is likely to be short-lived as the markets move into a crucial election week in Netherlands as the uncertainty could keep the euro subdued.

A win by the anti-EU Freedom Party led by Geert Wilders could potentially set the tone for the elections in France, which in any case is projecting a clear victory for Marine Le Pen to sail through to the second round of voting due in May.

On top of the above, the U.S. Federal Reserve will also be meeting next week on Wednesday, where interest rate hikes have been fully priced in already. A hawkish tone from the Fed and the freshly updated economic projections could see the markets price future rate hikes accordingly, which could weigh on the common currency.