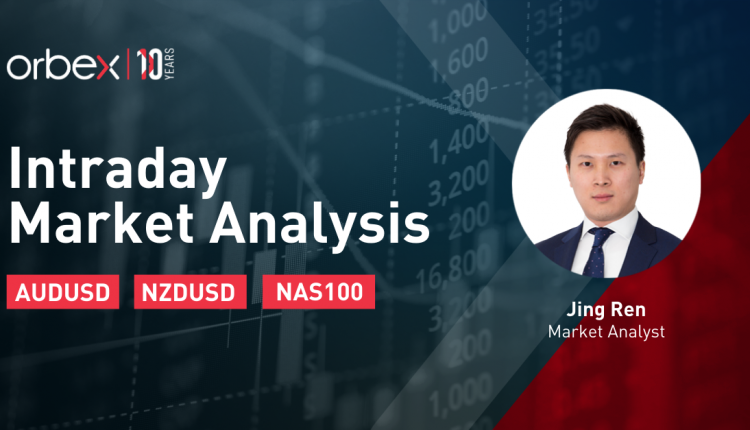 FOMC officials’ pledge to keep the monetary policy accommodative has pumped up the appetite for risk assets. After reaching near the March high of 13330, the tech index saw profit-taking as the RSI shot into the overbought zone.

The price has bounced off the demand zone around 12900. As the bullish sentiment makes its return after the recent correction, a neutral low RSI could prompt bargain hunters to get onboard.

A rally above the previous high may extend the recovery towards 13700.

AUDUSD breaks above the consolidation range

A fall in Australia’s unemployment rate has confirmed the country’s strong fundamentals and put the Aussie back on track. After hitting the supply area around 0.7800, the price action has previously gone sideways for the lack of a catalyst.

An oversold RSI indicator has raised traders’ interest to buy the dip at the psychological level of 0.7700. A rally back above 0.7835 could resume the medium-term uptrend.

Despite a worse-than-expected GDP, the kiwi rallied on the back of a dovish US Federal Reserve. Having established support at 0.7100 on the daily chart, the pair is gathering momentum for the next round of rally.

A low RSI suggests there is plenty of room on the upside, though the price action will first need to clear the origin of the latest sell-off at 0.7270.

That would pave the way for a rise above 0.7300. The reversal would gain traction as long as the pair stays above the immediate support at 0.7150.