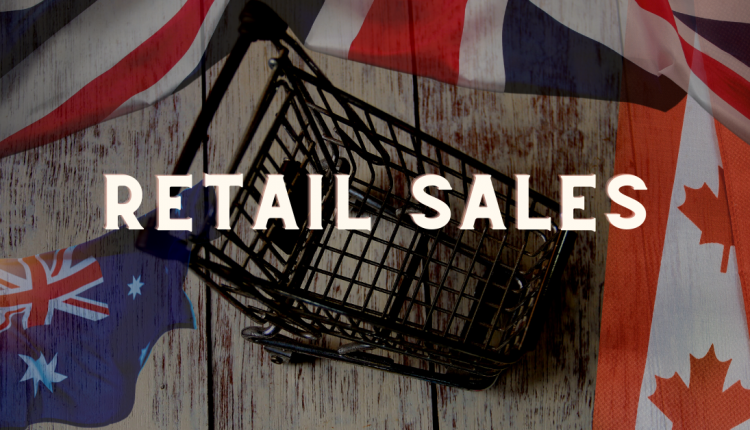 Aside from being a measure of consumer confidence, retail sales data also gives us important insight into what we might expect Q4 GDP numbers to be like.

Many economists predict most countries in the world have slipped back into recession during the (northern hemisphere) winter. So, this data could be a key for currency moves in the coming days.

It will also help us identify which countries have managed to avoid the worst of the economic fallout.

As China continues to try to stimulate its economy, and the US gets ready to increase spending once again, commodities are back in focus.

So, commodity currencies could potentially get a boost – assuming the economy doesn’t contract too much.

Australia set for a bit of a disappointment

The Australian dollar already weakened a bit this week, following the release of GDP data in China. Specifically, weakness in Chinese retail sales suggested that the recovery might be stalling, and demand for Australian raw materials might peter out.

Unfortunately for the AUD, there doesn’t seem to be much hope from the domestic market, either.

December saw the resurgence of cases in Sydney, which rocked markets over the fear of potential Melbourne-like contagion and lockdown.

However, that didn’t materialize. Nevertheless, projections now indicate that Australian Retail sales will slow considerably despite the holidays, growing just 0.4% compared to 7.1% in November.

Last December was a bit of a confusing time for UK consumers.

The countdown to the Brexit deal, the resurgence of cases, the reimposition of lockdowns, and the closure of the Channel leading to concerns of potential supply issues.

So, analysts are looking for an increase in sales, despite the uncertainty. But, of course, this is pre-Brexit. Therefore, it might not have as much predictive value, and therefore smaller reaction from the markets.

Expectations are for headline monthly retail sales to remain flat month on month. This is compared to -3.8% in November.

But, on an annualized basis, expectations are for it to grow at 4.1% compared to 2.4% in the prior reading.

Projections are for core retail sales (excluding food and energy) to grow at 6.8% annually. This is in comparison to 5.6% in the prior reading.

Canada already had extensive lockdowns by the start of December, so we don’t expect them to be a significant factor in the monthly change.

On the one hand, there was an expectation for the arrival of vaccines that would speed the return to shopping.

On the other hand, total employment in Canada took a hit, primarily in the part-time segment. This suggests that there might be less disposable income.

Projections are for headline retail sales to come in at 1.3% growth compared to 0.4% growth prior. But, that’s because of the increase in volatile elements of food, and particularly, energy with the increase in travel.

Expectations are for core retail sales to decline -0.7% compared to flat growth in the prior month, the largest drop since the start of the recovery.