Inside The Forex Market: Tracking The Rogue Traders 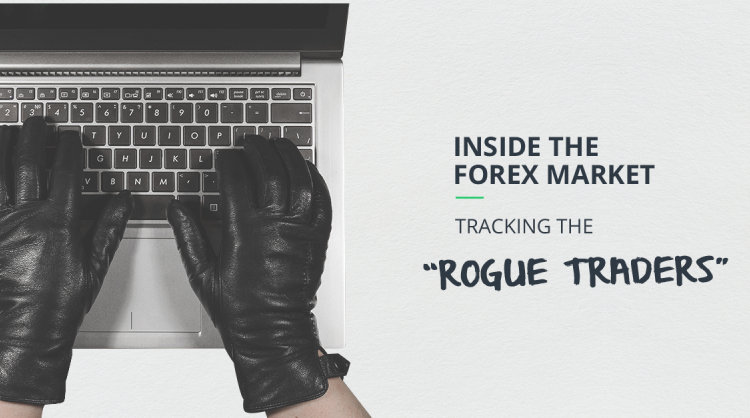 In The Spider’s Web

The Forex market is a complex environment due to the nature of the market itself, which is decentralized, and also owing to the different layers and levels of players involved. It is precisely this complicated structure which allows the market to function and perform so well, but it is also the reason why from time to time, a few devious individuals are able to operate illicitly.

In this article we will take a look at some of the most famous rogue traders of recent years:

Kweku is a Ghanian trader who was fired from UBS in 2012 after losing the company £1.4bln through fraudulent transactions, which is the largest trading loss in British banking history.  In fact, the losses suffered as a result of Adoboli’s trades, which were as high as £7.2bln at one point, were deemed by the Southwark Crown Cart to be so big that he was only “a gamble or two away from destroying Switzerland’s largest investment bank.”

Adoboli was essentially holding onto losing trades instead of closing them out and booking the negative positions and was hoping that the positions would turn around before he had to disclose them. However, the losses continued to grow and spiral before eventually, he lost all control over them.

Adoboli’s story is extremely similar to that of “The London Whale,” a JP Morgan trader who’s extreme position sizing earned him his nickname, who in 2012 booked losses of £6.2bln and was accused by JP Morgan of acting in an unauthorized manner and covering up losses. However, Iksil made counter-claims that he was not acting in an unauthorized manner and had been instructed by his superiors to continue trading despite the growing losses. Iksil’s boss in London was eventually fined £800k for his role in the episode.

While these episodes stand out because of the staggering size of the money involved, there have quite frequently been rogue traders operating on a much smaller scale. In 2014, Deutsche Bank in Australia fired trader Andy Donaldson who was concealing losses of around $5 million. However, other industry sources claim the losses were actually as high as $50 million over the 12-month period for which he was falsely reporting his results.

In the same year, the Australian Securities & Investments Commission banned Jeremey Kaviraj Nambiar, a former Westpac and Nomura trader, after falsely inflating his results by $18 million to cover up losses of roughly $3.65 million.

Problems With The Institutions

As recently as earlier this year, Deutsche Bank was once again in the firing line, facing a penalty in the US imposed by the Federal Reserve for failure to adhere to the Volcker rule.  The bank was ordered to pay back around $157 million on charges related to poor practice around market orders. The US Department of Financial Services is analysing chat messages between traders who appear to have been disclosing sensitive information about the positions of clients in the bank to other market participants, allowing them to target stop loss orders and manipulate FX rates.

Lessons To Be Learned

Hopefully, you can see that at the heart of many of these incidents of rogue trading, lies a serious but totally avoidable problem: holding on to losing positions. Among the many famous traders’ sayings and market adages that new traders should pay attention to, perhaps one stands out above all: “Let your winners run and cut your losses short”. One of the main issues that affect the performance of new traders is their inability to cut losing trades.

Typically, the reason why traders struggle to cut their trades is that either they fear taking a loss, they have a problem admitting they are wrong and/or they still think the trade will turn around. Each of these mindsets is sabotaging, and traders need to develop a strict routine of setting a stop loss whenever they place a trade and sticking to that stop loss. Otherwise, while the losses suffer probably won’t be on the same scale as some in this article, they will still hurt!

A Day in the Life of an Affiliate