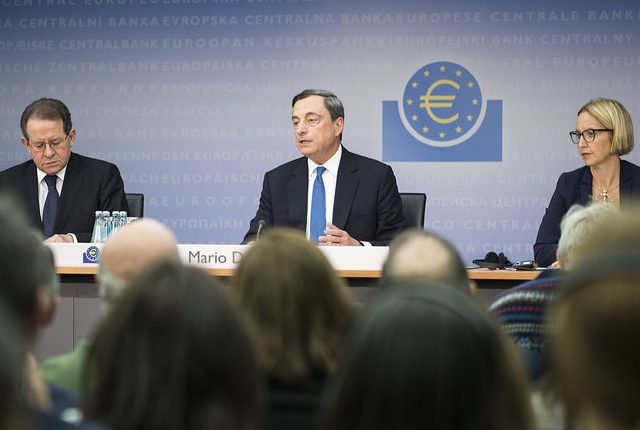 Despite a few hiccups, the single currency managed to regain the lost ground on Tuesday on a weaker dollar. Prices closed above the 1.1200 handle with Wednesday seeing very muted movements in the currency pair. With the ECB meeting due later today, the euro sits at a key price level, which could potentially define the near-term outlook.

Most analysts agree that the European Central Bank is widely expected to hold rates steady at today’s meeting but signaling further easing later this year. A few outliers, of course, that expect the ECB to expand its QE purchases at today’s meeting. That is unlikely to happen, considering that the exchange rate of the single currency has been relatively stable and the upcoming FOMC meeting just a few weeks away.

In the event that the central bank does not point at any further easing, it could largely put today’s ECB’s meeting as a non-event and perhaps push EURUSD slightly higher on the day. The staff economic projections are also expected to be released today in what the ECB called an assessment after the Brexit referendum. Recent economic data showed that growth was relatively stable but far from optimistic. Inflation showed no signs of upward pressures, while growth in the eurozone is expected to continue at the sluggish pace of 0.30% into the third quarter, if not lower.

Analysts from TD Securities note that “the base case scenario is that the ECB will keep rates and QE unchanged, in which case, the euro could squeeze towards $1.1310.” However, the press conference from Mario Draghi will likely be more volatile with any hints of extending QE, which is currently set to expire in March 2017.

Societe Generale notes that the ECB’s ability to keep the markets in a “wait and see” mode is coming to an end. SG says that “given the economic resilience to the Brexit vote and an anticipated increase in headline inflation, there is little chance of additional stimulus. Next year, we expect QE to be tapered as of March and end in December. To ease market concerns then, a TLTRO-III is likely, possibly including mortgage loans.”

There is no doubt that the EURUSD has been trading in a range since the big move after the June Brexit referendum. Prices have been bouncing off the 1.1400 – 1.1000 price level since then. The short-term outlook for EURUSD shows the possible head and shoulders pattern that is likely to unfold as shown on the chart below. The rising trend line, which also acts as a neckline support could be tested to validate the bearish pattern. In this case, EURUSD could be seen testing 1.1100 support initially followed by further declines to test 1.0900 lows. This bearish view is also validated by the lower high formed in prices yesterday, although it is still too early to tell.

Alternately, in the event that EURUSD manages to breakout above 1.1270 – 1.1280, then a daily close above 1.1300 could invalidate the bearish outlook, with the gains likely to be contained near the 1.1300 price level. Still, further gains are unlikely to be seen beyond 1.1350 at least until the FOMC meeting later this month.