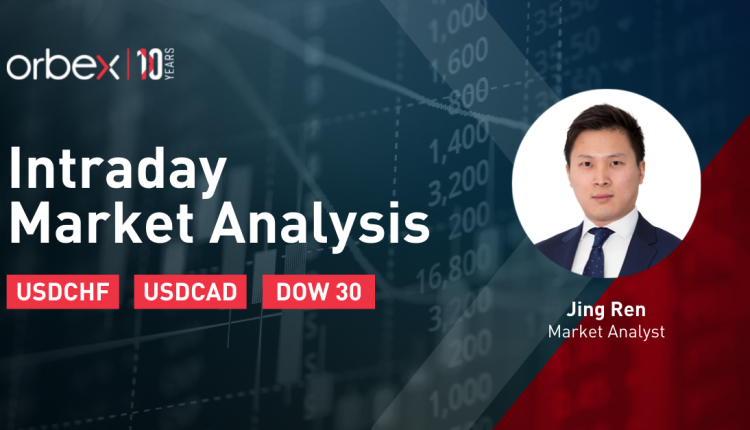 The US dollar bounced higher on solid jobs performance in October. A bullish RSI divergence indicates a deceleration in the sell-off.

Sellers have started to cover after a close above the immediate support at 0.9170. However, the initial momentum was held back after the RSI shot into the overbought territory.

The Canadian dollar claws back some losses after Canada’s unemployment rate shrank to 6.7% in October. The US dollar’s break above 1.2430 has put the bears under pressure.

An overbought RSI has put a limit on the upside as intraday buyers take profit. The bulls are making an attempt at 1.2500. This level was a key support on the daily chart and has now turned into a resistance.

A bullish breakout may pave the way for a bullish reversal. A fall below 1.2375 would put the demand zone over 1.2300 at the test once again.

US 30 rises as risk appetite grows

The Dow Jones 30 finds support from the passage of the $1 trillion US infrastructure bill. The index saw an acceleration to the upside after it rallied above the previous peak at 35600.

Sentiment remains bullish with short-term price action grinding up along a rising trendline. 36600 would be the next target.

The RSI’s overbought situation has led to a temporary retracement which could be an opportunity for trend followers to stake in. 36070 on the trendline is the first level where we can expect a rebound.

The Week Ahead – USD Strengthens as Fed Stays on Taper Course