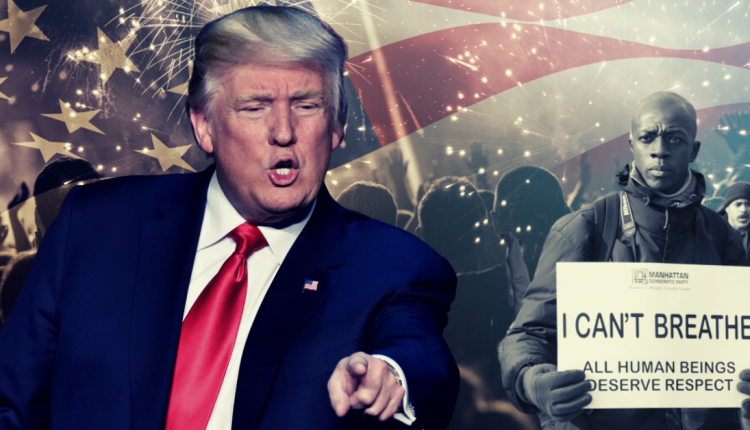 In the president’s 4th of July speech on the White House lawn on Saturday, there was an agitated tone to his delivery.

This is a speech that many presidents use to deliver messages of unity, hope, and praise to American people. However, this year, Trump opted to hammer home his vow to defeat what he is now calling the “radical left”.

In his Independence Day address, Trump stated that his administration would continue to “fight” to “preserve the American way of life”, saying:

“We are now in the process of defeating the radical left, the anarchists, the agitators, the looters, and the people who, in many instances, have absolutely no clue what they are doing.”

Columbus Statue Torn Down by Protestors

Trump’s speech came just hours ahead of racial-equality protestors in Baltimore tearing down a statue of Christopher Columbus. The statue had been erected in 1985 by the mayor at the time, William Donald Schaefer.

Statues of historical figures accused of racism have become targets as part of the protests still sweeping across America. This continues to happen despite Trump’s threats of ten-year jail sentences for anyone caught vandalizing or removing statues.

During his speech, Trump sought to defend the statues which have come under attack, saying:

“We will never allow an angry mob to tear down our statues, erase our history, indoctrinate our children. Their goal is demolition. The patriots who built our country were not villains. They were heroes.”

Trump has been accused by many, including his opponent Joe Biden, of fuelling racial tensions throughout the protests which have gripped the nation for a month now.

Trump’s rhetoric in speeches and Tweets have lacked sensitivity and empathy. And, at times, they have been outwardly hostile and aggressive. This has led to a significant drop in support for the president over recent weeks.

Despite the fresh surge in COVID-19 cases in the US, Trump barely mentioned the virus. This comes at a time when there were reports of 52,000 new cases in a day, last week.

In the brief comments he did make regarding the crisis, he praised the “progress” made. Trump said that despite the recent higher numbers of infections “99% of the cases were “totally harmless”  – a stat which many have disputed following his speech.

US Jobs Rebound, But Outlook Deteriorates

Trump’s speech comes just days after the US jobs report for June rose to record levels.

The NFP figure for the month came in at 4.8 million vs the 3.037 million expected. The result marks a further rise from the prior month’s 2.7 million increase, which was revised higher from the 2.5 million.

Despite the encouraging data, however, parts of the US have seen the reintroduction of restrictions over recent weeks.

Now, there are concerns that such restrictions might return if the spread intensifies further, clouding the outlook for recovery.

Following the recovery off the 1.3346 level support, USDCAD has since found resistance at the upper line of the bearish channel running from 2020 highs. While the channel top remains intact, focus remains on further downside in the near term and another test of the 1.3346 level support. To the topside, a break of the channel would bring the 1.3847 level resistance back into focus.

Gold Closes the Week with a Doji

The Week Ahead: The Clock is Ticking