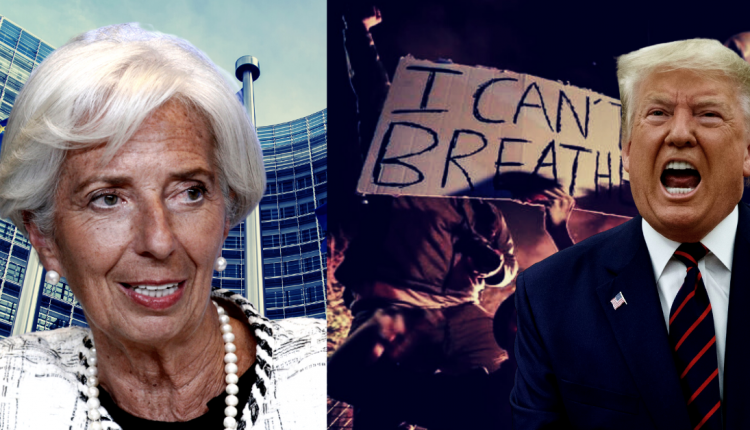 The gold market has come under pressure again this week amidst the ongoing rally in equities.

Risk markets appear to have shrugged off the civil unrest taking place across the US, as Black Lives Matter protests continue into their ninth night.

To some extent, the unrest has provided a distraction from the US/China tensions which had been increasing before the outbreak of the protests. For now, Trump appears to be too concerned with dealing with the continuing protests and riots to further exacerbate tensions with China.

The ongoing economic recovery underway as global COVID-19 lockdowns ease has been given further support this week from the ECB.

The central bank announced that it will almost double its stimulus package by adding a further 600 billion euros worth of QE, taking the total to 1.3 trillion euros. This latest wave of easing has further helped support gold prices as money markets continue to push out pricing for any renewed tightening.

Gold prices have found support once again this week as they retested the broken bull flag a further time. While price continues to correct lower following the breakout to fresh 2020 highs last month, focus remains on further upside in the near term so long as the 1679.87 level remains firm.

Silver prices have broadly tracked the moves in gold this week with the metal beginning the week in the green before reversing lower.

While we have seen some buying over the last 24 hours, linked to the continued sell-off in the dollar, silver is still down on the week, as of writing.

The key focus for silver traders is economic recovery. While recent data has started to pick-up, the rebound has proven slower than first thought. The last two Chinese manufacturing data releases have slipped back from the initial recovery made in March. This suggests the potential for similar movements elsewhere, which could lead to reduced demand for silver in the near term.

Silver prices broke out above the 17.6100 resistance last week which, for now, is holding as support. While this level remains intact, focus is on continued upside with the 18.8405 level the next key resistance to watch (current 2020 highs). To the downside, any break of the 17.6100 level will turn focus back to the 16.35 level support.