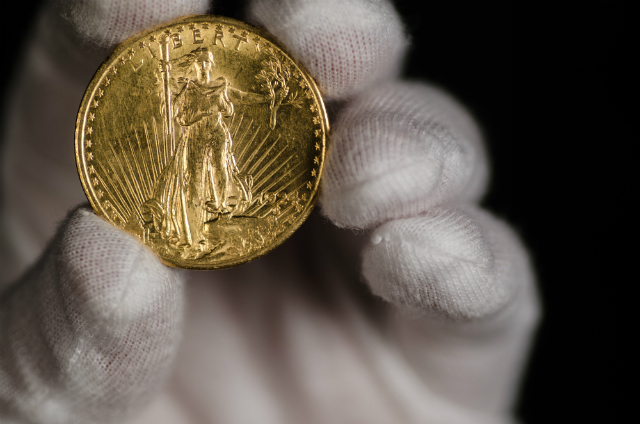 Gold & The US Dollar

The first and most obvious relationship which drives gold prices is that between the Yellow metal and the US Dollar. As Gold is priced globally in US Dollars, gyrations in the Dollar rate can significantly impact the price of gold. Whist to the newer trader it might seem that a rising Dollar rate would equal an increase in the value of Gold, the correlations are actually historically negative whereby a rise in the Dollar rate means that more Gold can be bought for the same Dollar amount and this the value of Gold goes down. Alternatively, if the Dollar falls in value, it means that it takes more Dollars to buy the same amount of Gold and thus a falling Dollar has typically been associated with a rise in the value of Gold.

The implications of this relationship in terms of opportunities for investors should be quite clear. Essentially, the trade should look to buy Gold as the US Dollar is falling and look to sell Gold when the US Dollar is rising. One very common scenario that tends to drive the price of Gold is a market reaction to US Interest Rate decisions and guidance from the Fed. According to the relationship we just discussed, If the raise rates at a meeting or are Hawkish, typically the US Dollar will rise and Gold prices will fall. Similarly, if the Fed cut rates or are Dovish in their guidance (suggesting that a rate rise is not to be expected in the near term) then we tend to see the US Dollar fall and the price of Gold increase.

It must be pointed out, however, that this relationship is not always clear cut and the correlation does at times break down. However, this year we have seen a strong negative correlation between the two with Gold rising and the US Dollar falling. The macroeconomic factors which affect Gold are complex and this year, the investor uncertainty surrounding the issue of the UK voting to leave the EuroZone, alongside a slew of G10 central banks cutting rates, as well as a scaling back of US rate hike expectations, has forced a large inflow into Gold.

Another very important factor which is influential in determining the price of Gold is the state of the global economy and investor risk appetite. If the global economy is perceived to be weak, we generally see capital outflows from riskier assets such as equities and high yielding currencies and capital inflows into perceived safe haven assets such as the Japanese Yen and Gold. Gold has historically been seen as a “store of value” with central banks typically holding both cash and gold in their reserves. Gold has traditionally been seen by investors as a hedge against inflation whereby the precious metal is expected to maintain or increase in value despite a depreciating currency and therefore is a popular safe haven destination for concerned capital in times of uncertainty.

When the Swiss National Bank removed their four-year currency peg unexpectedly in January of last year, they triggered a huge wave of financial panic and uncertainty which prompted a large inflow into gold, highlighting the manner in which investors tend to trade the currency during times of uncertainty.

What is arguably one of the biggest factors responsible for determining the price of Gold, which is also true of every market, is simply supply and demand. As central banks tend to hold Gold in their reserves, a large transaction in the yellow metal can often cause price movement.  Private demand also plays an important role in driving the price action of Gold with countries such as India having a sizeable demand for Gold during the typical “Indian wedding season”. Other Asian and Middle Eastern countries also have significant demand for Gold as well as China and Russia.

Indeed, over the last few years, for the first time since 2009, central banks turned net buyers of Gold whereby in years previous they has been net sellers.  One of the conclusions drawn from the development of this trend is that central banks are in fact hedging against their own policies which in recent years have moved further and further into the realms of unconventional monetary policy with low and negative interest rates and huge amounts of quantitative easing.

In terms of how investors should look to identify opportunities in Gold linked with global risk appetite, it is clear that during times of uncertainty and investor panic, Gold can be useful as a safe haven destination and buying Gold is reasonable. Alternatively, when times are good, and the global economy is performing well, investors can look to sell Gold as capital flows back into riskier assets.

Gold can be a fantastic addition to any trading portfolio and specifically because of the factors we’ve discussed; it works really well as a hedge for currency trades.  In addition to this, the technical strategies that traders apply to currency and equity instruments are just as effective when trading gold.