Master The Markets With Moving Averages 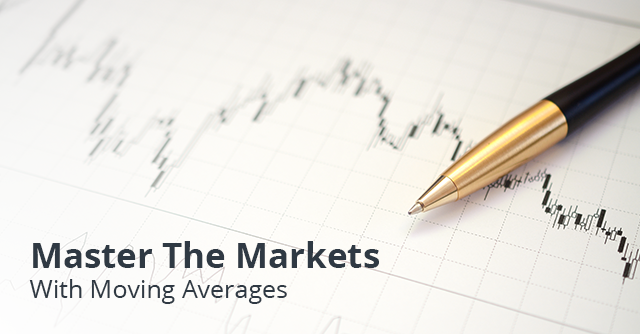 When traders are using a moving average in this manner, they will typically use the MA as a directional guide, looking to take trades in the direction of the MA using strategies such as breakout and momentum plays or looking to enter on retracements within the trend.  Trading in the direction of the moving average can be a great way of capturing momentum in the market. However, traders need to be careful that they don’t get caught in range bound conditions looking to enter every time price moves above or below the moving average.

There are many classic moving average crossovers used by technical analysts. Here are some of the key pairs:

In the image above you can see we have a price chart with the 50 and 200-day moving averages overlayed. There are two crossover instances on the chart; the first is the death cross where price sustains a heavy bearish trend after the 50 day MA crosses below the 200 day MA and the second is the golden cross where the price starts to trend higher after the 50 day MA crosses above the 200 day MA.

As with all systems and strategies, the moving average crossover is not without flaws and there are occasions where we get a false crossover which produced no trend and sees price reverse shortly after the crossover occurs.

Traders need to also be careful with how they take profit on crossover trades as one of the key issues that many traders have when trading crossovers is that if they are looking to enter a trade on a crossover and then exit the trade on the next crossover, there can be many instances where price is has moved into significant profit but then reverses heavily before the next crossover, meaning that trader ends up giving back a lot of profit before exiting the trade.

In the image above you can see an example of where trading crossover to crossover can be frustrating.  The market sells off heavily after a death cross, giving a really good level of profit. However,  price reverses sharply higher before the next crossover meaning that at the point the trade exits the trade, they would have given back a large amount of their profit.

What Matters The Most In Today’s Decisions : RBA & BoJ?